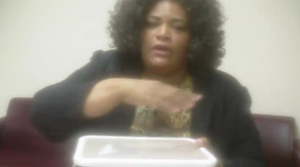 Rhoda Zione Alale and her magic plastic plate, harmonizing the wrong spinning energy in the air.

Rhoda Zione Alale is a crank. Her racket is all about capitalising on radiation woo and imaginary dangers of electrosensitivity.

As with most practitioners of pseudoscience and quack medicine, Alale tries to dazzle her audience with claims that she holds various degrees and has been given numerous awards. Alale claims to be an RN, and to hold both a Ph.D. and a DHP (whatever that is...), as well as to hold the title of "Presidential Commissioner" (whatever that is...)[1] and claims to be an African princess.[2]

This argument via alphabet soup is a common tactic which keeps one from having to provide actual data to back up claims, and instead merely say "trust me I am an expert!" The awards that Alale claims to have earned are particularly amusing as most of them are made up, purchased, unverifiable or at best completely unrelated to any scientific claims on her part.

Some of these "numerous prestigious awards"[3]:

On one of her websites she sells a gadget called a "flat battery" or "fb", which supposedly protects from "harmful" electromagnetic radiation from cell phones etc.

The smaller version looks like a simple bit of sticky transparent plastic.

It would seem that one thing this device can heal (according to the website, at least), is "black breast syndrome," a disease which she claims is present in "epidemic proportions", but whose only real mentions appear to be from Alale or her website. The "syndrome" could be some form of mastitis, commonly found in livestock and not humans, including, it would seem, goats. Indeed, and again according to the website, "FLAT BATTERIES™ were invented by Nurse Scientist, Rhoda Zione Alale, PhD, RN, DHP, CNHP, to heal herself of “Black Breast Syndrome” due to electromagnetic hypersensitivity and radiation poisoning."

"Dr." Alale claims to have quite close relations with no less than five U.S. presidents,[9] and according to an introduction to a podcast interview on the Progressive Radio Network, "She has been nominated for a Nobel Prize in Physics for her work in neurogenic science and nano technology development to harmonize radiation in the body and electrical devices."[10]

This claim needs to be taken with a large pinch of salt for a couple of reasons. Firstly, it isn't independently verifiable because, according to the Nobel Prize's official website, "The names of the nominees and other information about the nominations cannot be revealed until 50 years later."[11] Secondly, getting nominated for a Nobel Prize is not particularly difficult as nominations are not made by the Nobel Committee itself but by organizations and individuals who meet the committe's nomination criteria,[11] and hundreds of people get nominated by different bodies and individuals each year. In other words, it's not like being nominated for an Oscar - though that's what people who loudly claim to have been nominated want you to think.

The physics of Rhoda Zione Alale[edit]

Alale provides very little information about how EMF is supposed to cause horrible damage though in at least one testimonial video she gives us her version of how magnets work.[12] Apparently our bodies "spin" in the "right or forward direction" and electromagnetic radiation spins in the "backwards" direction. Apparently this radiation causes the body to spin backwards and somehow this causes the cells to leak vital nutrients.

Her vague claims are described in her invalid expired patent[13] which describes a non-novel use of non-novel materials, as well as her patent on using antennas to detect RF fields.[14]

Figuring out what the hell she is talking about in terms of real physics and biology is likely impossible as it is horrible mixture of introductory ideas strung together in a way that's just insane. But we can try. Alale's reference to spin is likely a mutilation of the concept that electricity moving in a particular direction will generate a magnetic moment. This is the famous right hand rule where your fingers curve in the direction of the current and your thumb points in the direction of the magnetic field. Magnetic fields are generated in the body due to the flow of charged particles, and the "direction of spin" of these particles create individual magnetic fields. However, the spins in the body are not all aligned in any coherent way. If that were the case we would have a net magnetic field and the north end of the compass would always point toward us, or we would get stuck on the door of our refrigerators.

Finally the idea that homeostasis and nutrient maintenance is somehow linked to the direction of the magnetic field of the molecules in our bodies doesn't even tangentially approach reality.

One may be forgiven for assuming Alale is into self-aggrandisement. Nothing is further from the truth and her modesty is on full display when she includes her post-nominal titles on press releases:[15]

Incidentally, if anyone knows who Rationalewiki (sic) is; please inform them they are going to be sued.