From RationalWiki
Jump to: navigation, search
Not to be confused with Sathya Sai Baba 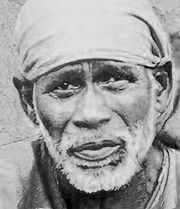 The guru's passport photo or something.

Shirdi Sai Baba (birthplace and date unknown, died 1918) was a beggar and Muslim/Hindu mystic who lived in a mosque in the village of Shirdi in what is now the state of Maharashtra, India. He remains popular among some Muslims and Hindus.

His devotees consider him to be many things including a great saint, fakir, sadguru (true guru) or even an incarnation of the Hindu god Dattatreya. He stressed total devotion to the guru (i.e. himself) and could be violent and abusive at times. His devotees interpreted this behaviour as benevolent acts intended to transform them spiritually.[1]

Shirdi Sai Baba did not speak much and gave no sermons. He stressed the importance of the guru, repeating the name of God, and surrender to him. Many miracles have been attributed to him by those who want to believe in such things. The first miracle attributed to him during his life was changing water into lamp oil to keep the lamps in the mosque burning. He did not deny having performed a miracle.

Another Indian Hindu "guru" Sathya Sai Baba has jumped on the bandwagon and claimed to be a reincarnation of Shirdi Sai Baba, but apart from a similar focus on miracles, there is not much similarity between the two.