From RationalWiki
Jump to: navigation, search
Not to be confused with Shirdi Sai Baba 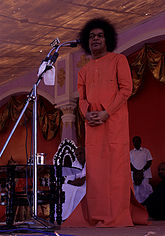 Sathya Sai Baba (1926–2011) was India's most famous magician miracle monger.[1] He was the founder of the Sathya Sai Organization, which has 1,200 centers in 114 countries. He claimed to be a reincarnation of the Shirdi Sai Baba (18??–1918). Unlike most other gurus, his claims of divinity are unambiguous and explicit.[2]

The Sathya Sai Baba movement has approximately 6 to 100 million adherents. The broad range of the estimate may stem from the tendency of the movement to inflate numbers to increase its perceived importance, but also because the movement has no clear boundaries.

In spite of his popularity, no serious biography of Baba exists, though his late secretary N. Kasturi wrote a hagiography of him. This is a hagiography in the original, literal sense of the word, i.e. not just an uncritical biography. Most writings about Baba are based on this hagiography.

Born as Sathya Narayana Raju in a poor and remote Indian village, he claimed to be a reincarnation of Shirdi Sai Baba in 1940 and subsequently used Sai Baba's name. He used his cleverness to fool the people and became a guru and fraudster. In spite of that, he may have been sincere about certain aspects of his many teachings. Apart from the fraud allegations, Baba has also been accused of sexual abuse and pedophilia.[3][4]

Baba's followers claimed that he performed the following miracles:

The sleight of the hand tricks by Sai Baba had the indirect effect that miracles seemed a more plausible explanation for other events to devotees.

However, Sai Baba stated that he refused to make grand changes in the world, claiming that this would disrupt the karmic flow of events though he claims that he has the power to do so.

Skeptics argue that the burden of proof for the miracles is on Sathya Sai Baba because he claims to break natural law. Devotees reply that no deity has ever subjected himself or can reasonably expect to subject himself to testing in a controlled environment.[7]

The ashrams where he stayed during his life time (Prashanti Nilayam in Puttarpathi and Brindavan, in Whitefied/Kadugodi) still have thousands of visitors during festivals and hundreds of visitors during ordinary days. A very important activity there used to be darshan (seeing of the guru) which included hours of waiting before he shows up. Since Baba's demise in 2011, darshan consists of going near his grave to pray and pay respects.

His miracles have been studied by the parapsychologist Erlendur Haraldsson, based on interviews with witnesses because Sathya Sai Baba did not allow Haraldsson to investigate him from nearby. This has been likened by Hari Sampath, a former member of the security department of Sai Baba's main ashram, to a doctor who is not allowed to come near his patient, in other words, one cannot come to an informed opinion in such a way. Nevertheless, Haraldsson's study gave Sai Baba some credibility.

Other prominent persons who have exposed Sathya Sai Baba include David C. Lane (a noted figure in the anti-cult movement), Indian rationalist Abraham Kovoor, physicist H. Narasimhaiah, and above all rationalist Basava Premanand who was the founder of the Indian Skeptic. Apart from that, he has also been criticized by the former follower Tal Brooke who became a conservative Christian and many other former followers. Brooke continued to believe fully in his ability for perform miracles and considered him the Antichrist.

He teaches the unity of religions and claims that all religions lead to God. His teachings are an eclectic form of Hinduism. The anthropologist Lawrence Babb noted that his followers in New Delhi tend to come from the modern, educated, cosmopolitan middle and higher classes.[11] Babb also noticed that devotees tend to see Sai Baba's hands everywhere in their lives, in a reversal of Max Webers's disenchantment of the world. For Indians the personal relationship with Sai Baba makes a person a follower, believing in Sai Baba's miracles is a necessary but insufficient condition: some Indians dismiss Baba's miracles as mere siddhis, acquired magical powers which they do not see as proof of divinity. He is somewhat unusual among gurus because of his explicit claims to be omniscient, omnipresent, omnipotent and to be an incarnation of Shiva and Shakti. In addition to that he claimed to be God himself, the father who sent Jesus to Earth.

His ashrams are in Kadugodi near Bangalore, Karnataka and adjacent to the village Puttaparthi where he was born in Andhra Pradesh.

Some time after his death many valuables were found in his private living quarters.

Many spiritual seekers came to him because they were looking for a living master. As a consequence, the movement seems to be in decline after the guru's death. As of 2014, there is no sign of a revitalization of the movement. There have been disputes about the huge material heritage of the Sathya Sai Central Trust.