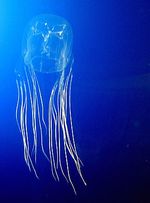 is all-natural and therefore touching its tentacles is good for you and will send you into a state of reconnection with the earth-spirit through horrible pain and then death in a few minutes.

The fallacy is a naturalistic fallacy and thus an informal fallacy. The fallacy can be described in one of three ways:

Appeal to nature is a fallacious argument because the mere "naturalness" of something is unrelated to its positive or negative qualities – natural things can be bad or harmful (such as infant death and the jellyfish above), and unnatural things can be good (such as clothes, especially when you are in Siberia). Another problem is the distinction between what is "natural" and what is not, which can be murky: crude oil occurs naturally, but it's not something you'd like poured on seabirds or your garden. The word "natural" has no exact definition and can be used in multiple ways, thus allowing equivocation.