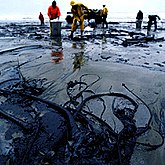 Oil is a slippery and flammable liquid. Primarily, oils are composed of long chain hydrocarbons and are non-polar, making them non-soluble in, and less dense than, water. Hence, oils will float on top of good old H2O.

Oil can come from many sources:

Plant-based oils are often used for cooking, wood preservation and general waterproofing, and as a base for paint. While many fad diets advocate "fat free", some fats absolutely are essential nutrients. The two essential fatty acids that the human body can't synthesize; Omega-3 and Omega-6. Well, technically the body can synthesize Omega-6... from Omega-3, but not the reverse. These are used in the brain and skin, and while most organs do use a bit as well although, if you don't get enough of those omegas it'll be those two organs which fail first.

Your body doesn't digest those Omegas based on necessity; if you have sufficient Omega-3's but an excess of Omega-6 in your diet, you simply won't absorb enough of the Omega-3's. This has resulted in a bunch of quasi-woo involving fish oils, which have a lot of Omega-3, as "brain food". Generally, no, you can get enough from cheap vegetable oil, assuming you know which ones. Flaxseed oil has the most Omega-3, but comes with the drawbacks of a low burning temperature (can't cook with it), as well as tending to go rancid too readily. Canola oil has the best Omega-3 to Omega-6 ratio of any cooking oil, ironic considering the hatred of the stuff, followed by hemp oil. Soybean and walnut oils simply have insufficient '3, but they are no nowhere nearly as bad as peanut, olive, palm or many other tree nut oils, which is ironic considering how much attention they get for being "healthy".

Whale oil was used heavily in the past, and through the 19th century, for lamps and heating. This industry led to the near-extinction of many whale species, and resulted in generations of schoolkids forced to read Moby Dick. 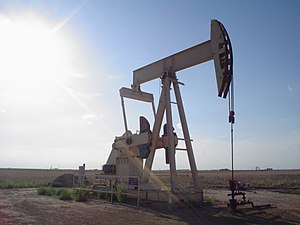 Oil that is squeezed out of the ground, also known as "rock oil," "mineral oil," or "petroleum", is a source of fossil fuels. It was formed over millions of years from plant and algal matter that was covered in sediment in rivers and swamps, and prevented from decaying.

One of the distillates, kerosene, supplanted whale oil in the late 19th century -- and was itself supplanted by the electric light bulb. Fortunately for the oil producers, other distillates (such as gasoline and diesel oil) had other uses, and have given humankind a good hundred years of cheap energy. Of course, liberating this energy requires burning the petroleum distillate with oxygen from the air, which releases carbon dioxide. Since petroleum deposits take millions of years to form,[note 1] when the easy stuff to drill and pump is gone, it's gone forever.

Closely related to Crude is something called "kerogen". Kerogen is the precursor to all the fossil fuels, and with the addition of a bit of heat, oil products can be extracted from it; this is the "shale oil" that's been an issue for a little while,[2] and there's actually more FOUR times as much kerogen in the Earth's crust as there is oil.[3] What's the catch? Well, threefold. First, the processing of kerogen into oil products requires quite a bit more energy than oil does, meaning the carbon footprint is somewhat higher than oil's. Second, kerogen is pretty much the "heaviest" oil there is, as in lots of tar and ashpalt. While heavy oil can be "cracked" into the tastier stuff, again this is energy intensive and a lot of the tar is used as filthy, filthy bunker fuel for supercontainer cargo ships. Third, the hard limit for how much oil we can burn up is "all of it". The Earth will still be habitable albeit less pleasant if we burn all the crude oil, but burning all the kerogen too would be disastrous for civilization.

There is a smear campaign against oil; here are some facts.

Oils of varying formulations are used extensively as lubricants to reduce wear in machinery and to improve the experience of sex and sex toys. Do not even think of using oil to lubricate a condom, though; oils weaken the latex, increasing the chance of breaks transmission of disease. Use a water-based lubricant, folks, like the ones from Kentucky.

Oil can also be used in a crude form of preventative medicine, since a thin slick of oil added to bodies of stagnant water will suffocate mosquito larvae (which could grow up to spread malaria, yellow fever, dengue fever and chikungunya, lymphatic filariasis, West Nile virus Eastern equine encephalitis virus, Tularemia, and itchy bites on babies). This is not practiced as much as it once was, since it also suffocates everything else trying to live in the water.[note 2]

In fairness any chemical that was being stored inside a boat, even if the tanker were made of ice

and carrying pepsi cola, the sheer amount of that much pepsi would be an environmental disaster waiting to happen.

It is usually assumed that we will run out of oil in about 10-25 years, depending upon the source of estimation.[4][5]

Since the formation of oil deposits involves millions of years, creationists have cast around for an alternative explanation for fossil hydrocarbons, and have come up with the hypothesis of a global flood.[6] Simple, really. Something to do with fossil sorting.

Other uses of the word[edit]