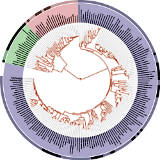 Common descent is the scientific theory that all living organisms on Earth descended from a common ancestor. Biologists have evidence that all life developed from a common ancestor that lived just under 4 billion years ago, a concept accepted by virtually all scientists working in the field. The structures and functions of all living organisms are encoded in the same basic nucleic molecules, DNA and RNA. Similarities in amino acid sequences between various organisms further suggest common descent, and the fossil record also shows cases in which one plant or animal type evolved into different types over geological timespans.

Creationists reject common descent as it implies an evolutionary model. Young Earth creationists, being Biblical literalists, reject it outright, insisting instead that life was somehow created in just a few days, less than ten thousand years ago. Intelligent design proponents usually just claim that "we don't know what happened", though they may accept certain aspects of common descent as long as they are still allowed to claim that the designer messed with the genes and mutations along the way. Cdesign proponentsists generally believe in a hodgepodge of these positions.