Amino acids are substances formed from molecules that consist of atoms from specific functional groups. They are the building blocks of protein molecules. Amino acids can be found inside all known organisms, and unique varieties can be created artificially.

The name "amino acid" comes from the presence of two functional groups: an amine-group (-NH2) and a carboxylic acid (-COOH). Any molecule containing both these groups is technically an amino acid, but the term is generally used for a selection of organic molecules of biological importance, such as glycine (H2N-CH2-COOH). These molecules differ by their side chains, which give each of them different chemical properties such as, for example, polarity (the property that governs whether the molecule is attractive to water or not; this property is important in protein folding as described below).

The amine group of an amino acid can chemically join to the acid group of another amino acid to form an amide bond. This enables long chains of amino acids to form. These amino acid based short polymers (chemical chains) are known as peptides and can vary in length from just two to several hundred or thousands (like proteins).

An important property of the natural occurring amino acids is their stereochemistry (the chemistry concerning space and the occupation thereof). The central carbon atom in the naturally occurring amino acids is chiral with four different groups attached to it.[1] These four different groups can be arranged differently in space to produce mirror images of each other, described in lay terms as left or right-handed in reference to how hands are essentially identical but mirror images that cannot be superimposed.

Almost all amino acids have the same absolute stereochemical configuration, the (S) configuration.[2] This is at odds with intuition that would suggest a 50:50 mixture of each, as both forms are of equal energy and with equal chemical properties, there is no way to distinguish between them without another chiral source.

Although stereochemistry can be conserved from chemical precursors, this doesn't fully explain where it initially came from, leading some people to conclude that there must be some form of design or creation going on. The naturalistic explanation of why one form was favoured over another is not fully formed, although creationists do neglect the presence of diastereoisomers (which occur when two stereoisomers interact and are not chemically or energetically equivalent) or the presence of other chiral agents such as polarised light.

In the genetic code made of DNA, a group of three nucleotides (a codon) encodes for a specific amino acid. As a ribosome moves along the DNA strand, a collection of codons will be read to produce a polypeptide. Sufficiently long chains, with the assistance of other enzymes, then fold up to become active proteins or other enzymes.

Of the 20 amino acids existing (plus one special rare amino acid usually not counted), the human body can naturally synthesize 12 of them. This means the other 9 must be obtained from outside sources, i.e. by eating protein and then breaking those down in their components (namely the amino acids). Just about any protein source will have at least some amount of the essential amino acids in it; but if you subsist entirely on fats and carbohydrates (sugars) with no protein intake, you'll eventually get a protein deficiency condition such as Kwashiorkor

The 20 amino acids used in the translation (synthesis of proteins): 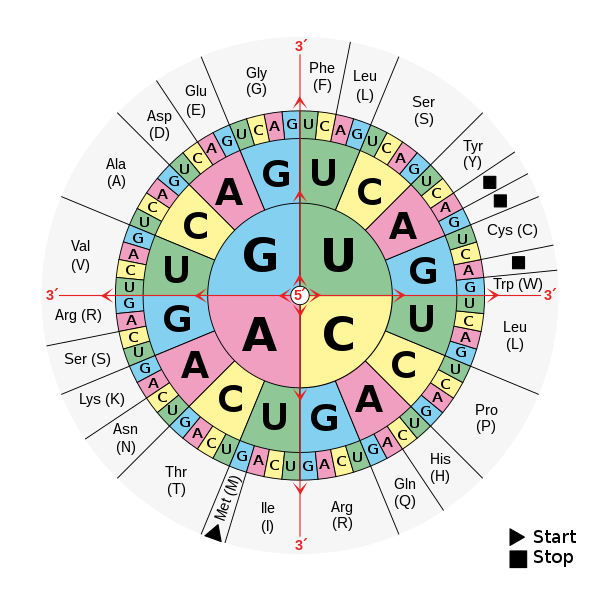 Graphical representation of how to read the genetic code via codons (the nucleotide triplets): You start from the middle (5') — the larger letters — and move away from it (3'). Notice that multiple codons codify for the same amino acid but there is no overlap to what amino acid it codifies; this is important, since that prevents ambiguity within the genetic code i.e. a codon codifying for multiple amino acids. That would be catastrophic!
▶ Start codon: The amino acid methionine (Met/M) starts every protein sequence (via the AUG codon).
● Stop codon: This is not codified by an amino acid, but signals to the biologic machine to end the synthesis of the protein.

Our articles related to molecular biology