This is text added later to see if the image overlays it. ħuman 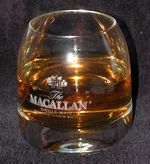 and this is text. Interesting. ħuman

It's what appears if there's no image (the code is [[Image:something|sizepx|image text]]). Human your image was obscuring the text below it because of the vertical adjustment so I removed it. Looks like it's not perfect... -- Nx talk 04:30, 27 January 2009 (EST)

It also show when you "mouseover" the part of the image that links to the image itself - how is the "size" of that part controlled, by the way? ħuman

I get "yummy" appearing when I hover over the top left & right corners of that image in Firefox, but not IE. Wëäŝëïöïď

Interesting... It's a transparent link hovered over the image, so clicking where the link ends brings one to the image page. Time educated Hoover! 15:34, 27 January 2009 (EST)

I had to change the positioning of the inside diffs to relative on FF and everything not IE because of FF2. IE still positions them absolutely (using a CSS selector hack), which is better, but FF2 doesn't like it for some reason. Maybe there's some kind of margin or something on it moving it down a little so that it doesn't cover the image exactly, although this isn't the case with Hoover's sig. The sizepx part is determined by the width parameter. -- Nx talk 15:57, 27 January 2009 (EST)
But if you want proper image link support, you'll have to ask Trent to install an extension, like this -- Nx talk 15:59, 27 January 2009 (EST)

I know why the div isn't covering it. You wanted to resize the image, so you provided 150, 150, however the template only uses the width to resize the image and keeps proportions. You'll have to calculate the height parameter manually. -- Nx talk 16:03, 27 January 2009 (EST)

I uploaded an image of Human's test and my sig as they appear highlighted on Safari 3; it appears to show the break between the image and the link: 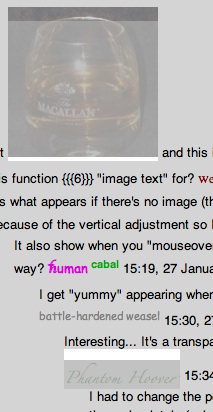 Width/height - yeah, first I used 150 wide by 15 high, and it doesn't "resize" like in html, it just showed the top 15 pixels of the image, after converting it to 150 wide. So I picked 150 high randomly to keep playing. BTW, right now I get a purple bar across the bottom 10 pixels or so of the image when I mouseover it. ħuman

OK, I think the purple "bar" is just the "underline" that appears whenever you mouseover a link, but the height of what's being linked and the code are mucking with it (XP Pro/FF3) ħuman

Presume you know about WP's Click Template which is slightly different.   .  Violence is the last refuge of the incompetent 09:53, 14 March 2009 (EDT)

I used an old version of that as a basis for this, but unfortunately that used block divs that inserted a linebreak, which I managed to fix so it works in all the major browsers. They updated the template to use the imagemap extension (which we don't have), then they updated it to use MediaWiki 1.14's link attribute. --  Nx/talk  10:03, 14 March 2009 (EDT)

While many people have used this to use custom fonts, others may still want to use it to have "pictures" as their visible sig. Please don't override it peremptorily. It's useful. ħuman

Then is it explained clearly, one click from the help page? And, really "more complicated" is wiki phail. I see it all over WP, the people who know how to do the programming show off by being really bad at documentation, so they are the only ones who know how to use shit. Please don't let this happen here. ħuman

I've explained how to use it. Template:Imagelink:

Standard mediawiki way: (i.e. the same way you would insert an image, except you add link= to link it somewhere other than the image description)

Ah, I see now, sorry. I think I was getting this work mixed up with the "custom font project". ħuman