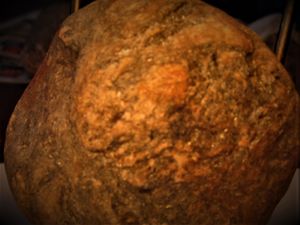 This image shows a representation of some species of American lion of uncertain period. The American cave lion is thought to have gone extinct about ten thousand years ago. The stone in which it is carved is pegmatite and most of the details were made from existing crystal encrustations. A human face appears in the lower left corner (see the original file for more context), suggesting the creature is indeed a form of megafauna. We assume the artist lived in southern New England thousands of years ago. It is interesting to surmise that the people of the this pre-literate culture preserved memories of the paleo period by using art as a literary proxy, if they are indeed from a later period than the American lion. 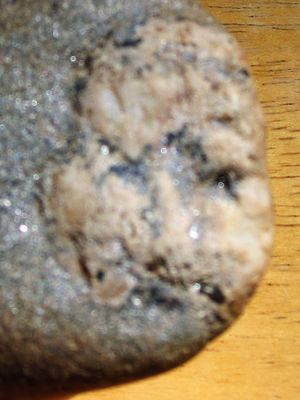 This sort of stone was a favorite medium of the artistic community producing the material described here in this section. It is a finely grained stone, probably a pegmatite granite with large crystal encrustation allowing for a cameo-style carving. It has a frontal plane approximately 3"x2.5". All similar hand-samples at site location were collected and carefully cleaned in anticipation that some sort of artifact might be revealed following the discovery of this example. Thousands of stones were examined and more artifacts discovered.

The interpretation of this particular cameo is very uncertain. Is it a portrait of the artist himself? The crystal inclusion in the stone was insufficient to encompass the man's face. But the curvature of the stone in the area where the chin should be clearly affords an illusion of a complete image. The man appears to snear at the viewer, showing teeth on the right side of his face, and seeming to evince disgust. Was it a message meant for another individual, or merely an expression of general dissatisfaction? Whatever the artist had in mind, the face represents an ancient American.

The wolf-head hatchet, probably part of a cache of scattered grave goods, was recovered lying at the bottom of a stream near the base of a large natural hill in southern New England. It may be presumed to have been recently excavated by common water erosion. The stone measures approximately 5"x2.25" and shows the stylistic incorporation of natural crystal structures in the design. The white crystals can be seen as teeth and outlining the boundary of the ear. An application of red paint is very visible in the eye and mouth, giving the head an angry, bloody appearance, and an overall menacing effect. The item was recovered in a small stretch of bottom ground, where many stones, could be seen to have been stained with red ochre and graphite black. A large block of mineral graphite was also recovered from this area, one not known to produce graphite.

The Bear and the Shaman[edit] 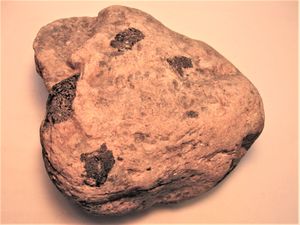 This carving is made from soapstone with hornblende inclusions, about 4"x3.75"x2". The bear is associated with strength and medicine in connection with shamanistic societies. It is one of a number of artifacts with bear emblem carvings found in what we surmise to be an artists colony or the work area of a very prolific artist. Presuming the carvings collected in this location were created by one individual, since dozens of animals are represented, it would seem they were assembled for a special purpose. For each animal representation found, only one artifact has been found representing its kind. The bear has been the exception. It is thought that, for various reasons, neolithic American people believed everything, even stones, had special qualities. Animals existed as examples of Platonic ideals, or elders of their class. One might surmise that these stones represent those elders. 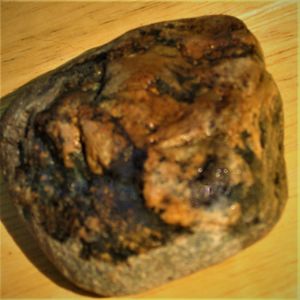 The image of the bear at rest is carved on a small metamorphic stone with encrustations affording an angular view of the animal. Approximately 2.5"x2.5"x1." The intention of the artist is speculative. The life of the bear was ostensibly a real concern of the artist/shaman who created this and other animal-related artifacts. One might wonder if this image is one of a sleeping bear or a recently killed bear. Bears were hunted, of course, by neolithic people. The bear also represented powerful medicine and therefore its behaviors and characteristics would have been of special interest to the shaman. 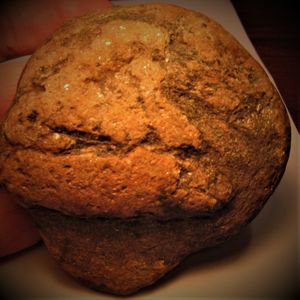 Here we have a fascinating scene depicting a large bear attacking a hive of honeybees. The stone is of mixed composition with concentrations of mica schist. Approximately 3"x3"x1". There is a playfulness in the artist's work representing the swarm of honey bees as light reflected by the small leaves of mica. The bear is seen to be protecting her nose with her left paw while reaching forward towards a hollow log from where the swarm presumably originated. Thus here we have evidence that the artist/shaman had special knowledge concerning the habits of bears; realizing that bears had sensitive noses. The image depicts a second, smaller bear, behind the larger one. The second bear may be a cub of the larger bear, or simply a juvenile companion.