From RationalWiki
< User:DiamondDisc1
Jump to: navigation, search
This is a draft that anyone is free to edit as they would a mainspace page.
Please do not add categories to the page until it enters mainspace.
Advice: Most draftspace pages go nowhere. If you want the page to get into mainspace, you as the creator of the page should plan to do the work to get the page into mainspace.
Note: Draftspace articles have looser tone rules. Please AfD draft articles only for missionality. Remove libelous statements as per basic BLP guidelines.

School segregation is still a problem today. Instead of discriminatory laws, district borders are instead redrawn to keep minorities out of certain schools.

School segregation by race was banned in 1964 with the passing of the Civil Rights Act. However, the law was very specifically designed by Northern lawmakers. The Civil Rights Act targeted explicit segregation of race. A state could no longer designate schools for white and black students. However, the law failed to target laws that would allow for more covert segregation. For instance, if a school was in a district that had more white, middle-/upper-class students due to zoning laws that prevented students from a lower income bracket or from a minority racial group. As such, much of the North and West is more segregated than the South. By exploiting legal loopholes, districts are free to segregate their schools all without violating the Civil Rights Act. [1]

To get a better idea of modern school segregation, let's look at some of the ongoing school secession efforts.[2]:

There is no way of denying the truth: most of these secession attempts are discriminatory. Examples such as St. George's 70% white proposed district being carved out of a district that is mostly (55%) black and Malibu's median income of $135,530 compared to Santa Monica's income of $84,562 are very obviously discriminatory.

"The proposed district isn't racist/classist! People in the new district area just tend to be white and/or rich!"[edit]

This should be obvious, really.

"I don't want my kids to get stabbed/addicted to drugs/laid/etc.!"[edit]

Sadly, this argument is fairly common. The inherent dog whistles and bigotry behind these arguments is, by this point, a dead horse. 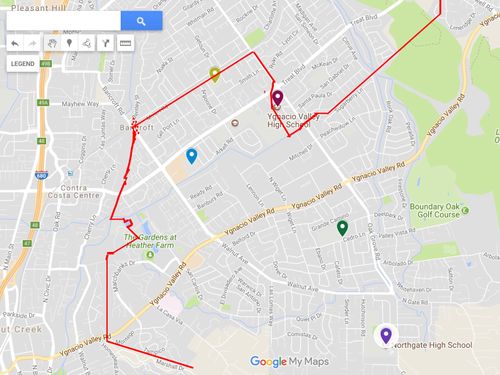 The blue school is Bancroft Elementary School in the proposed Northgate school district secession. The school has a split feeder pattern, with around 27%[22] of students being sent to Oak Grove Middle (yellow) and Ygnacio Valley High (purple-red) and the rest being sent to Foothill Middle (green) and Northgate High (purple).[23] The red line denotes the new district boundary. The Northgate secession effort proposes fixing said feeder pattern by sending all Bancroft students to Foothill and Northgate, even though Oak Grove and Ygnacio Valley are closer to Bancroft and therefore the more logical solution. It just so happens that Oak Grove[24] and Ygnacio Valley[25] are mostly poor and Mexican, which is totally not a motivating factor in trying to send the mostly white and rich students at Bancroft[26] to the mostly white and rich Foothill[27] and Northgate.[28]

As you can expect, the Northgate secession effort did not meet criterion 3 of CA's 9 criteria: Equitable Division of Property/Facilities.

"The district we're trying to separate from sends some of our money to other schools!"[edit]

Why school segregation is harmful[edit]

We live in a more diverse world than ever[edit]

A study by the Early Childhood Research Quarterly finds that black first graders in integrated schools experience larger gains in reading skills than their counterparts in more segregated schools.[32] Other research has shown that the test scores of white kids attending a school with a large amount of Black and Latino students don't drop when they attend.[33]