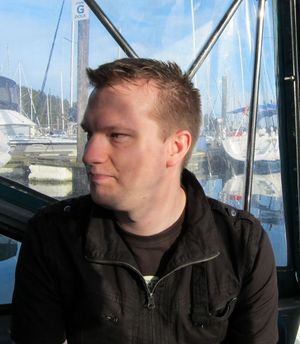 Sorry ladies (heterosexual) and dudes (homosexual), but the Erk is taken. And, in this photo, is apparently blowing a raspberry in the air? Also I am likely not a moai although there may be some in the family.

Some day this may be a glorious shrine of coloured tables and exciting yet humorous images. Until then here are some details about the man behind the three-letter-nickname.

I'm interested in food woo and food articles because of my lifestyle as a foodie (by marriage) and as a scientist and medical professional.

I'm also interested in alternative medicine and medical woo: know thy enemy. And I seem to be getting involved in a lot of molecular and cellular biology, which is odd since I haven't done that stuff in a couple years now.

Atheism and religion are interesting reads but I try to avoid edits, because I get too irritable.

I acutely noticed the other day that there are plenty of progressive, left-wing satirists, but I can't think of a real right-wing satirist. Why are they all so earnest and angry? Satire isn't inherently left-wing, or shouldn't be. I bet it's even a Conservative Word.