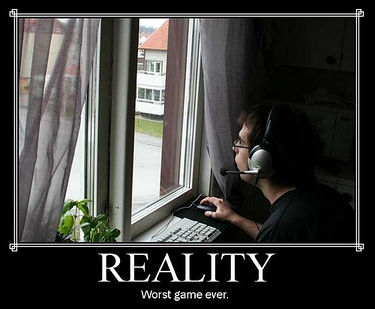 Real life (RL) is a fully-immersible, three-dimensional role-playing game set in the Real World. It features real-time raytracing for the most photorealistic graphics, force feedback and lifelike A.I. Like most Massively Multiplayer Online Role Playing Games (MMORPGs), the objective of Real life is to obtain the best clothes possible, either by paying "money" (see below) in a shop or auction, defeating a powerful rival or "ninja-ing" them from your (soon to be former) friends.

It is possibly one of the oldest games of its type, but unfortunately it requires many years of training ("childhood" in gamespeak) to play really well. Possibly because of this many alternative games have become popular in recent years.

Skilled players are able to interact with other players over time to form what are called "relationships". These are meant to assist the player when they enter the more difficult parts of the game.

One of the most useful — and still sometimes controversial — elements of RL is the gametool "money". This "money" may be exchanged for other goods or services and may well be the main reason for the game's continuing popularity. (But also see criticism section below.)

Given that many experienced players feel that the game itself can sometimes descend into boring repetition, some users have experimented with undocumented ways of hacking the user interface. One of the most popular ways is by using the unofficial addon Alcohol; indeed many users feel that it is the only way to play the game, and have this addon more or less permanently enabled.

Unfortunately, the use of such interface editors is frowned upon and may result in a warning message called "sickness" which can be followed up by total expulsion from the game — otherwise known as "death". "Death" is a permanent state and gamers are not allowed to reenter the game after even a single episode of "death" (there are very few exceptions, or better yet reincarnation). In case of those who do manage to stay in the game, most of them reported issue with the force feedback.

RL has been subjected to much criticism.

Although RL advocates maintain that these have a positive influence on gameplay many players are not so sure. One typical complaint is that maintaining "relationships" needs a substantial investment in time — time which could otherwise be more usefully spent in productive activities such as editing wikis.

Although the introduction of "money" made the game substantially more nuanced, many players have found that in order to obtain a significant quantity of it they have to carry out a series of boring repetitive tasks. Heavy disparity of money based on the player's spawn point has also been criticized, and it's been proven that moderately wealthy countries tend to be happiest, with the nation-state known as Paraguay being happiest. Some spawn so wealthy they never have to face life's problems.

The "death" sanction for even minor mistakes is thought by many to be too severe. The lack of an appeal process is another problem.

The necessity of the "work" module is frequently criticized.

Real life has a major tendency towards liberal bias. Which is a statement that is itself an example of bias.

Actually, real life has all kinds of bias, "liberal", "conservative", and multitudes of others. The funny thing is that people suffering from the various ideologies only seem to be able to see the biases of others that don't believe in the same ideologies. This is one thing they share that makes both the real world and the internet such a terrible place...

Evidence that the game is a knock-off of the Metroid series:

That thing that happens when you move away from the computer.

It is regarded by some to be a myth or illusion.

It is best explained, not as a game of dice played by a deity, but as an ineffable game devised by said deity, which might be compared, from the perspective of any of the other players [i.e. everybody], to being involved in an obscure and complex variant of poker in a pitch-dark room, with blank cards, for infinite stakes, with a Dealer who won't tell you the rules, and who smiles all the time.

Best taken in small dosages and with extreme caution. Moderation is the key.
Caution: May be habit forming

If tempted to "do something fun" by another person, ask them to strip down to make sure they do not have carpe diem tattooed upon their person. If they do, run as quickly as your fat little legs can carry you, back to your computer.