This space is for the Conservapedia Danish Writers Group (DWG).

We need to elect a president.

Even though User:Interpreted hasn't made any edits in months (and has never officially joined), I propose we elect him as our Monarch. Bohdan2 16:53, 26 July 2008 (EDT)

I second the motion. ħuman

Well, I certainly support the motion as well, but with an absentee monarch, we need an Evil RegentTM to de facto run the group and oppress the loyal subjects. Who should that be? --AKjeldsenCum dissensie 16:24, 27 July 2008 (EDT)

As presumably the only actual Dane-by-birth here, I feel that this somewhat paradoxically, yet not entirely illogically disqualifies me from the position. Also, you never know when I might get bored of CP again. --AKjeldsenCum dissensie 16:28, 27 July 2008 (EDT)

Now we need a Secretary General to keep our minutes, and an Exchequer of the Treasury to keep our hours.

Can I be the Minister for Defence? ħuman

It's the perfect position from which to launch my Evil Regent schemes... ħuman

Here are some articles to write. I already proposed these to Hugh, but he ignored them,

Also, we need to improve the cp:Danes article. That is probably top priority.

I note that these are "RW" templates - shouldn't we be using a "CP" named version so we don't have to remember to edit them when copying things over? ħuman

Manual of style for the logbook[edit]

7-25-08: I have begged Wikinterpreter to join us. He has not responded, and I fear the worst.

7-28-08: We are running out of food and fuel. The mission seems hopeless. Bohdan does not realise I have stolen his logbook.

7-27-08: I can't even log on to conservapedia. I am going to have to write Danish content here to transfer later.

7-27-08: Conservapedia is sooo slow. I can't take it anymore! (Your harmonica is right where you left it)

We need some sweet awards to give ourselves. Any ideas? Can any of you design something that will seriously leave the recipient in awe? Bohdan2 21:57, 27 July 2008 (EDT)

Well, I did save all the drafts and separate working parts of the one I put on Trent's user page way back when, so I can make fairly impressive barnstar-type things pretty quickly from my box of spare parts. I suppose I would need some bits of Danskische imagery, sayings, and mottoey-type stuff to make them more appropriate. I would think that "normally" we would wait until someone did something inspirational, but this is the DWG, after all. Let us build some fine medalry in preparation for glorious acts of valour. And you're right, cp:Danes is truly lame. Not even one photo of a clog! ħuman

Oooooh! What should it say, and I suppose I'll have to font up a "DWG" logo? ħuman 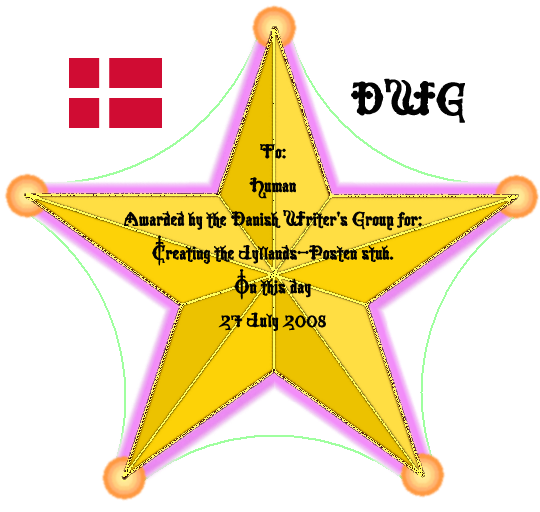 Something like that? (PS, that font is called "crusades") ħuman

PPS, every element of this image is "separate" on my hard drive version, so bits can be removed or altered. I could also go in a different direction, say, a banner assembled out of several images (if we want to use that font it will have to be as images). It could be a "generic" certificate with room for the editor, the reason, and the date ready to be filled in with text or a new text image in the cool font... ħuman