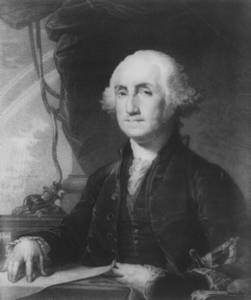 Washington at his desk in 1789

George Washington was the first President of the United States of America and the general who led the American Patriots during the American Revolution. He is often referred to as the Father of the country and is arguably the most famous and notable of the Founding Fathers.

Washington was born in Westmoreland County, Virginia on February 22, 1732 to Augustine and Mary Bell Washington, in a prosperous family of English descent. Washington became a surveyor with the help of his half-brother Lawrence and the Fairfax family who he lived with after his father's death and he became a sort of father figure to Washington.

In 1754, in the French and Indian War, young Washington fought as a soldier for Britain. He then entered politics, serving from 1759 to 1774 in Virginia's House of Burgesses and he married Martha Dandridge Custis.

He became an American hero fighting for the Patriots for independence against Britain in the American Revolutionary War. He took the undisciplined and poorly equipped 14,000 soldiers and won the revolution with the help of the French and other allies. He then went to his home in Mount Vernon until he was called to preside over the Constitutional Convention in 1787.

He then was unanimously elected the first President of the United States. He set an example for all future Presidents to follow and issued two warnings. Not to create political parties and not to meddle into foreign affairs and future Americans completely ignored both of these warnings. He also personally took care of the Whiskey Rebellion in western Pennsylvania. He left office in 1797 after declining another term, thus establishing the unwritten rule that a President shall serve two terms and all did until Franklin Delano Roosevelt got four terms and then it became a Constitutional amendment.

For those living in an alternate reality, Conservapedia has an "article" about Mr. Bojangles/Rewrite of George Washington