R   E   T   I   R   E   D
This user has requested that their pages be archived and left untouched.
This is due to a private decision to leave RationalWiki and never come back.
Please honor their request. (Inquiries here) 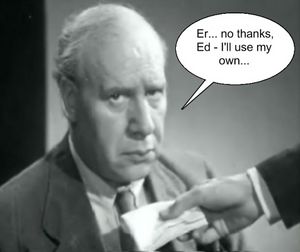 On second thought I could use a snort!

Is that crusty part edible?

I will have you know that my repara needs absolutely no therapy whatsoever and by "absolutely no" I mean AB-SO-LUT-ELY (about sex six months oughta do it) ZERO! ZILCH! NADA! (This won't count as a pre-existing condition will it? You know how it is with this LOUSY RW health insurance! $3.50/mo shouldn't have no restrictions! And have you seen the NOSE on the doctor? You would swear they've gotten "Patch Adams".
CЯacke® 08:59, 30 April 2008 (EDT)

Wait, what—you're leaving? Don't go! You're our token homosexual! How will we survive without you?! --

I'm the OUT token homosexual...the closeted ones (you know who you are) will still be here. As far as retiring...the template was added some time ago. I am as retired as I'm likely to get until I die. Cough cough wheeze. CЯacke® 12:02, 30 April 2008 (EDT)