From RationalWiki
(Redirected from Aether)
Jump to navigation Jump to search 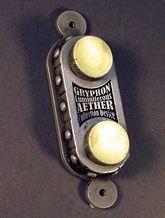 For other uses of the term ether (and aether), see the fork page ether

Ether, or æther, was the stuff used to replenish mana/MP Ike’s signature skill in Fire Emblem the lifeblood of the Bionis an invisible substance that was theorized to fill all the problem parts in pre-Einsteinian physics theories.

In its final incarnation, people invoked it to fill outer space and explain how light could travel with no medium to carry it.

A brief history of ether[edit]

Ether had a long and respected history in physics. It generally played the role of That Thing Which Magically Solves All the Problems in My Pet Theory, a part currently enjoyed by dark energy.

The idea of an ether-like substance in physics has been around since Aristotle, whose essay in Physics Book IV, section 8 eventually got summarized over the years as the statement: "Nature abhors a vacuum". This concept led philosophers to speculate that all the space in the world must be filled with something, even when it didn't appear to be. That thing was, of course, a mcguffin ether.

Since mechanical waves need a medium, people thought electromagnetic radiation also needs a medium (the aether). Originally aether was believed to be a fluid, i.e. a gas or a liquid. When Malus discovered polarization, wave theory proponents like Young and Fresnel assumed the light was a transverse wave. Such waves can propagate only in solids.

The idea was upheld in the late nineteenth century when the Michelson-Morley experiment disproved its existence put it in big trouble. The idea of aether had its apologists as late as in the 1920s when the most advanced Lorentz aether theory finally got disproved. Some defenders of the aether, i.e. Dayton C. Miller and Herbert E. Ives, conducted their experiments and held to their beliefs as late as the 1930s.