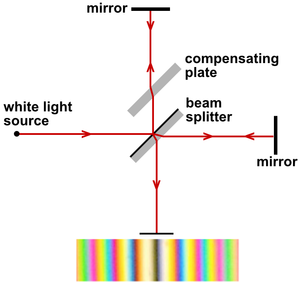 A schematic of the Michelson-Morley experiment

The Michelson-Morley experiment was a late nineteenth-century attempt to establish the truth of a scientific paradigm, but which instead completely demolished it, paving the way for the revolutionary changes in physics at the start of the twentieth century. It is now seen as a triumph of the scientific method, as it is a shining example of the principle that if the theory doesn't fit the facts, then change the theory.

Until this experiment, it was believed that light was propagated through a medium known as luminiferous aether, for which there was no direct evidence but which had been around as an idea since Aristotle. The experiment consisted of measuring the speed of a light beam as it travelled, firstly in line with the Earth's movement around the Sun, then, a second time, across the line. Differences between the two speeds would establish "etheric drift", proving the existence of ether and revealing some of its properties. However, the experiment revealed that the speed of light was the same regardless of its orientation. As a result, the ideas that were held about the luminiferous aether were changed drastically, leading to various hypotheses attempting to explain the results. Variations of the Michelson-Morley experiment were performed in order to test those hypotheses. It wasn't until the arrival of the Lorentz transformations that a model was consistent with the results, as such it was initially thought that while light did travel slower, its path had been contracted due to the experiment being done at a certain speed relative to that of the aether. It wasn't until later that the idea of a luminiferous aether was shown as superfluous and abandoned; all observers measure the same speed of light.

And that's how science works. Not by sticking loyally to the ideas of a big name, but by seeing if the ideas are true or not. And if not, out they go.

The Michelson-Morley experiment is occasionally cited by proponents of modern geocentrism as proof that the Earth is not moving.