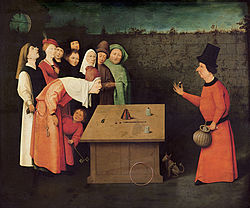 "The Conjurer" by Hieronymus Bosch
This article is about magic that humans can do. For godly magic, please see creationism.
See magical thinking for the thought process that believes that correlation is the same as causation.

Magic (or "Magick"[note 1]) is the alleged ability to manipulate supernatural forces. Technically speaking, prayer falls under the definition of magic, as it is often done with a specific outcome in mind. Stage magic, which has historically overlapped with Woo magic, is the art of making things happen that appear to be impossible. It is an ancient art, used over the centuries for both entertainment and deceit, and knowledge of magical techniques figures heavily in the modern skeptical community as a means of detecting fraud amongst those who claim paranormal powers or phenomena.

Magic is of several types, depending on the scale and techniques used. Most magicians start off with sleight of hand techniques, which are meant to mimic teleportation and telekinesis effects on a small scale, while others specialize in mentalism

, which imitates the claimed effects of psychic powers, particularly clairvoyance and telepathy. Stage magic is magic on a larger scale, including seemingly impossible escapes (Harry Houdini, a well-known rationalist in his own right, was the master of these), survival tricks, and large-scale apparent teleportation effects. In addition to these techniques, there are also different subgenres and styles including (but not limited to): Street magic that's influenced by guerilla performers in cities; Gospel magic that's used to evangelize children; Comedic magic, as made famous by Penn & Teller and Bizzare magic that emphasizes story-telling and/or horror elements.

Overall, unlike in the scientific community, the tricks used in creating magical effects tend to be closely held, with exposure of the mechanism considered a form of treason to the magical community. Penn & Teller have made a long career of apparently exposing tricks but have avoided criticism from the professional community by only exposing secrets to tricks they developed themselves. Magician Leonard Montano drew strong criticism from the magical community for doing the Breaking the Magicians' Code specials on the US Fox network in the 1990s, largely for exposing other peoples' effects without their permission. Another example would be the widespread practice of placing torrents of whole videos (even DVD rips) detailing the exact mechanisms of commercial magic tricks for public use upon the Internet, where college students with no money can easily download them; the puerile practice of YouTube exposure by kids with webcams is even more widespread.

All the same, Penn and Teller believe that even if you show how a trick is done, the level of skill and practice required to perform it well still makes it seem special and mysterious to the layman.

Stage magic has also been used fraudulently; much of the Spiritualist movement of the 19th century was based on fraudulent use of magic by people who claimed to be mediums, and in modern times self-proclaimed "psychics" such as John Edward, Sylvia Browne, and Uri Geller use mentalist techniques such as cold reading deceptively to fleece the desperate and credulous ("talking to the dead" has long been a conceit of would-be psychics, meaning that many such people are preying on those vulnerable after a loss of a loved one).

Several of the best-known skeptical authors, including Martin Gardner, James Randi, and Penn & Teller are trained magicians, as is debunker Derren Brown. Skeptical magicians have been critical to exposing the bad behavior of alleged psychics and faith healers; Randi's two biggest trophies are Uri Geller and Peter Popoff. Randi's team has, at various times, convinced serious and well-regarded scientists that they are psychic or possess other paranormal powers,[1] while simply using the tricks of a magician. These men, among others, believe that while scientists are generally logical folk, they do not understand the trickery used by magicians, and can therefore still be fooled by it.

Magick is a form of woo is a term sometimes used by the more spiritual pagan believers for what happens when magical thinking becomes religious in nature, but it's not "politically correct" to call it a prayer. It is not to be confused with stage magic, where everyone knows it's really a trick. (Of course, as with anything with neopagans, there are various shades of belief here -- some think that trying to come up with a difference in terms is ridiculous.) Remember, it's totally different from prayer. Honest.

See the main article on this topic: Aleister Crowley

While many neopagans claim that Magick is the "proper" spelling, used to distinguish "real" magic from stage magic, the K on the end was in fact added by Aleister Crowley in the early years of the 1900's for his Thelema religion. The distinction made by Crowley was that "magick is the art and science of causing change in accordance with will." He argued that, in essence, this made every act a magickal act. In practice, magick is viewed by its practitioners as being any alleged supernatural act, ranging from transcendental meditation to tripping the light fantastic with a handful of magic(k) mushrooms. As such it is not a belief system in itself, but simply the practice of mind alteration. Ultimately, by this definition, both psychiatric and psychological counselling systems fall under its remit, resulting in considerable confusion about whether any proponent suggesting a visit to the shrinks (or "head shrinker") should be taken literally or metaphorically. Note that by this definition "magick" exists solely in the physical world and is in no way by definition supernatural.

Many cultural anthropologists use the term "magic" to describe common belief structures found between cultures. James Frazier is usually accredited with labeling the different kinds of "magic" found in cultures. He noted that most forms of ritual and belief systems could be categorized under either "homeopathic magic" or "contagious magic."

Homeopathic magic is based on perceptions of similarity between ritual objects/procedures and that which they are said to act upon. Contagious magic is based on the belief that items once in contact with one another retain some sort of essence of the original contact. A voodoo doll is an example of homeopathic magic, as it resembles the individual whom it is supposed to affect. Holy water is an example of contagious magic as it is the Priest's blessing which is said to "sanctify" it. Anthropologists, then, use the term "magic," as a category of beliefs and/or rituals rather than as a supernatural phenomenon.

came up with "laws" of magic in his 1971 Real Magic which were used in a RPG supplement called Authentic Thaumaturgy which presents 26 "laws" of magic.[2] "The Laws of Magic are not legislative laws but, like those of physics or of musical harmony, are practical observations that have been accumulating over the course of thousands of years, with remarkable similarity in almost every known human culture. Even those who rightly remain skeptical to the reality of "psychic phenomena" and the systems of magic developed to control them may find these Laws an interesting and detailed guide to what psychologists and anthropologists refer to as “magical thinking.”"[3]

Everyone can exhibit beliefs in these forms of magic. For example, many people would prefer a book that was signed by its author rather than a perfect forgery, and most would attribute to it more value. Though one could argue this is because others attribute more value to it, the physical contact by the actual signature vs. the perfect forgery is an example of "contagious magic" increasing the value of something regardless of the fact that there is no inherent difference between the genuine and the forgery. Similarly, people will be more prone to value works by an already famous author (or their direct descendant as in the case Adrian Conan Doyle) which is "association". In a similar vein many people would be reluctant to buy houses where a famous murderer lived, own their goods or even touch things they owned. We somehow feel that these, really quite normal things, are somehow magically tainted by their previous owners.

While earlier writers had suggested similar ideas such as "Witchcraft to the ignorant, … simple science to the learned"[4] and "...a performance that may some day be considered understandable, but that, in these primitive times, so transcends what is said to be the known that it is what I mean by magic",[5] Clarke presented a version that was easily quotable and understandable.

Clarke gave an example of the third law when he said that while he "would have believed anyone who told him back in 1962 that there would one day exist a book-sized object capable of holding the content of an entire library, he would never have accepted that the same device could find a page or word in a second and then convert it into any typeface and size from Albertus Extra Bold to Zurich Calligraphic", referring to his memory of "seeing and hearing Lynotype machines which slowly converted ‘molten lead into front pages that required two men to lift them’".[6]

Similar examples have appeared in the Star Trek Next Generation series. In "Contagion", Picard talks about the Iconians "traveled without the benefit of spaceships, merely appearing out of thin air on distant planets." When Wesley comments "Sounds like magic," Picard responds "Well, we would appear magical to Stone Age people."

In "Who Watches the Watchers", the concept is explored even further:

PICARD: Put yourself in her place. You see, she cannot kill a hornbuck at a great distance. You can. You have a power she lacks.

NURIA: Only because I have a bow.

PICARD: She's never seen a bow. It doesn't exist in her world. To you, it's a simple tool. To her, it's magic.

This has resulted in its own set of woo like ancient astronauts being used to explain nearly every incident of magic or supernatural beings.

Of course, Clarke's law does not say that technology, however advanced, is magic. The people who built and operate the putative technology would understand exactly what real scientific principles were being used. Only those who lack that understanding would mistake it for magic.

From beyond the third dimension[edit]

The concept of higher spatial dimensions[note 2] has allowed "supernatural" to effectively mean something akin to "existing outside of our perception" — thus opening the flood gates for all sorts of woo — because, assuming this is correct, how could you say that magic isn't the result of someone somehow challenging fourth (or higher) dimensional powers?

Thankfully, this sort of "deepakese reasoning" falls flat on its face the moment we employ basic reasoning tools, such as — in this case — the requirement of falsifiability, the burden of proof and occam's razor.