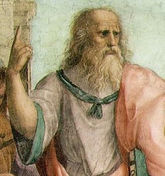 Plato was a student of Socrates and the teacher of Aristotle. His books were largely written in a dialogue style whereby he presents the other sides of the argument and then shoots them down. Sometimes he presented these arguments in a strawman form, and the vanquished arguments were later used by other philosophers (as in Thrasymachus and Nietzsche,[1] Glaucon and social contract theory[2]).

In his most famous work, The Republic, Plato argued that the ideal model of government is a three tiered system, with the Philosopher Kings at the top,[notes 1] the military to the side, and the proletariat/workers on the other side which corresponds to his tri-aspected soul: reason, appetite, and spirit. Other ideas to come out of The Republic are the noble lie, the allegory of the cave, the world of forms, and the negative portrayal of democracy as mobocracy (as was frequently the case in the Greece of his time).

Central to all of Plato’s thought was the idea of Platonic Forms (or simply Forms), a metaphysical and epistemological view which affirms the existence of certain abstractions that are timeless and unchanging. Plato asserted that these objects or Forms are thus mind-independent entities: that their existence and nature is transcendental independent of our beliefs and judgments about them and is contrary to nominalism. Examples of forms include numbers, mathematical objects, shapes, logic, relations and essences being examples of abstract objects that are affirmed to exist independently of language and even thought, though many of them can be expressed through language.

(of incompleteness theorem fame), who accepted the mathematical nature of forms due to problems of circularity and infinite regress when justifying axiomatic statements.

Plato's most novel philosophical idea postulated that the observable world exists as contingent of Eternal forms, which were ultimately alien to the world we live in. This really caught on in the ancient world. The "myths" for this particular idea come from the dialogue Timaeus, which unlike most of the other dialogues, appears with little argument from the other characters and appears to be Plato's actual thoughts on the matter. Many still point out that other "myths" appear in dialogues are not necessarily intended to be read literally (like the version of Socrates that appears in the dialogues). Even Aristotle suggests in On the Soul (by means of a pun) that most of Plato's myths were presented as allegories of education rather than actual reality. Nevertheless, Timaeus was one of the most widely-read of Plato's dialogues and this idea began rapidly popping up in nearly every world culture affected by the campaigns of Alexander the Great, and is generally referred to as Philosophical Hellenism.

It has been argued that many aspects of Christian theology derive from Platonic philosophy. The Christian concept of God as infinite goodness, wisdom and ability is derived from the Platonic idea of the perfect form of all goodness. Indeed, Timaeus was the only Platonic dialogue translated into Latin and widely available during the Middle Ages (thanks a lot Boethius

AntiCitizenX, when writing his "Top 5 Philosophical Failures of Christian Apologetics", decided to include "obsessions with Platonism" at the #4 spot, due to the tendency of Christian apologists to assume that numbers do exist and to answer atheists with the question how they account for the universal laws of logic.[3]

is described as a chaste, non-sexual love, such as that between immediate family members or between a teacher and his or her students. It originates from Plato's work Symposium, although he did not create the term himself - in fact, the Symposium focuses on love in a much broader sense, including what we would nowadays call 'romantic love'. The implications of this nomenclature inspired comedian Randy Lubas to quip, "Imagine not getting any so much that they name 'not getting any' after you!", and that he wanted the opposite to be named after him; e.g., "Are you two friends?" "No, we're purely lubasonic!"