From RationalWiki
(Redirected from African)
Jump to navigation Jump to search 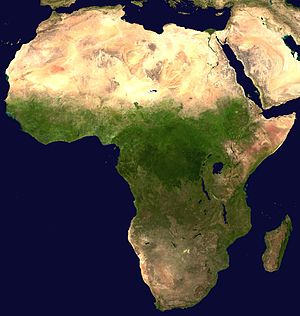 Africa is the second-largest, most war-torn continent on Earth. About 14% of the world's population lives there.

It is the birthplace of humanity, unless you buy into UFO theories, or (snort) Young Earth Creationism.

Much to the chagrin of those who already lived there, much of Africa was colonized by the Europeans. Slavery was part of this blight, but even after this ended, racial prejudice continued. Most of the colonial-era borders survive today, and have turned many African states into patchworks of ethnic groups who despise each other. This resulted in the violence that characterized much of modern African history. This includes genocide in Uganda, Rwanda, and Burundi, and bloody civil wars in Nigeria, Sudan, Sierra Leone, Liberia, and Ethiopia. Also, there's AIDS and Ebola.

Africa is the native home to over 2000 language groups and the vast majority of human genetic variation, almost 1 billion people, climates ranging from the driest of deserts, to the thickest of jungles, to the ice-covered mount Kilimanjaro. And speaking of animals, where else will you find lions, rhinos, great apes, and zebras? It even has its own goats such as the pygmy goat

and the badass ibex

Along with thousands of languages, Africa is also home to many different groups of people, in many different countries. Across the vastness of the continent, these countries are extremely different and the people in them have many different cultures and traditions. (This doesn't stop Westerners from thinking it's just a couple of mud huts.)

Africa is a geographically diverse continent. The north of Africa in prehistoric times used to be savannah which had dried out to form the Sahara, one of the world's biggest deserts (although definitely not the driest). Beyond the desert belt and towards the Equator, the ecosystem changes to one of brushland and later on jungle as one travels southwards. Despite being a world-renowned source of critical minerals and crops, Africa by and large has fallen on hard times. Although (white) people are quick to point out that South Africa is Africa's richest state, there are others who point out that it is nowhere as close to Libya in terms of petroleum reserves. Despite African history being extensive and boasting one of the important sources of Western culture and having empires that already had outside connections, it was only when the Europeans began building overseas empires that the whole of Africa became connected with the modern world.

As mentioned above, Africa is rich in natural resources, and, contrary to popular belief, was taken advantage of in the Middle Ages, with many civilizations, such as Mali, Benin, Ghana Awkar, the Kongo, Zimbabwe and North Africa taking advantage and prospering during this time period. Trade was mainly done between West African empires and the rest of the Arab world, with Europe beginning to increase trade with Africa towards the end of the Middle Ages and into the Age of Exploration.

Along with this, the Moors, a group of Amazigh and Arab invaders, conquered Spain in the 8th century, spreading Islamic culture with them.

Although parts of Africa had been visited time and again by all sorts of explorers, including the Chinese, exploration of Africa did not really take off until the 16th century and the Age of Discovery in Europe. Portuguese sea captains, seeking out a new trade route to China, felt their way around Africa in order to spread the Gospel, monopolize the spice trade and vanquish the Moors by bringing the Crusades to them.

At the same time, the Islamic sheikhdoms of North Africa were prospering as Europe moved from a less confrontational stance with Islam to one of accommodation and commerce. Local Arab potentates under attack by Catholic fanaticism would often find allies in the form of pragmatists such as the French and the Genoese who competed against the Spanish and the Venetians.

Although the 17th and 18th century saw little change in Africa, the latest export to the West now was slaves. Slavery was mutually beneficial to both the European traders and the powerful in Africa. Conflict occurred in Africa where one tribe would simply wipe another out by selling off the survivors to Europeans for shipment across the Atlantic, as well as to the Arab taskmasters residing across the Red Sea. While some European people had qualms about slavery in the years after the French Revolution, the same could not be said of the Western and Arab slavers—or of the Africans who engaged in slave trading. It can be assumed that those that were sold as slaves, or vulnerable to being sold, disliked slavery.

European rivals saw the need to balance their own power on the continent by taking up exclusive control of vital natural resources to fuel their economies, as well as prime their war machines. In events like this, it was not just gold and diamonds that appealed to the Europeans now, but natural resources such as rubber, coffee, and metals that were being fought over. If anything, it is during this period that the Europeans showed their true colours to the Africans, creating a destructive legacy that still continues to this very day.

After World War II completely demolished Europe, African colonies gained independence, but under the wonky borders established for the ease of the European powers. As a result of this and the Cold War oozing its way into African politics, basically the entire continent descended into chaos. After the Cold War, the chaos didn't end, and some regions have effectively descended into complete anarchy since. Some fear global warming will cause some regions to turn entirely uninhabitable, leading to the largest refugee crisis in human history.