Coffee (Coffea robusta and C. arabica) is native to Ethiopia and Yemen. It was domesticated relatively late in human history, with the first definitive evidence of domestication in the 15th century CE.[1]:3 Most of the coffee in the world today is produced in Brazil, Vietnam, and Colombia.

"The Vertue of the Coffee Drink"… a broadsheet advertisement from 1652

Prior to the era of modern medical science, no-one could definitively say whether coffee consumption was unhealthy, healthy, or neutral. Nonetheless, arguments about its healthiness (and other social effects) started early, shortly after its arrival in Mecca.[2]:49

A 1674 London advertising broadsheet characterised coffee as a panacea:[6][7]

Given that it came to the West from the Middle East, coffee obviously represents a sinful foreign abomination which undermines the very fabric of Our Civilization. Just like minarets. Or the hijab. Or Arabic numerals. Or Abrahamic religions. 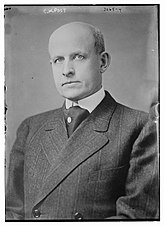 The discovery of caffeine as the active ingredient of coffee in 1819 by chemist Friedlieb Ferdinand Runge[8] eventually led to a new avenue of approach for food scares.

One of the founders of Seventh-day Adventism, Ellen G. White (1827–1915), advised Adventists to avoid caffeine and declared that consumption of tea and coffee "is a sin, an injurious indulgence", arguing that caffeinated beverages caused "headaches, wakefulness, palpitation of the heart, indigestion, trembling, and many other evils" and wore away "life forces" and were poisonous.[9][10][note 1]

(1852–1943), a Seventh-day Adventist and a protegé of White, was also a rather quacky medical doctor. Kellogg opposed both tea and coffee because they contained caffeine, regarding anything with caffeine as poisonous.[11] Kellogg also invented the corn flakes breakfast cereal. This invention, and his views on caffeine, inspired one of his patients, C. W. Post

Post, previously a real-estate developer, once treated for a mental breakdown at Kellogg's sanitarium

was meant to be a caffeine-free (implicit) coffee substitute. Post made an enormous fortune from the company by using massive amounts of advertising[12] that included both vague, ("There's a Reason") plausible but unsubstantiated ("Mr. Coffee Nerves"[13]) and wildly unsupported attacks against coffee:[12]:95

Post's attacks against coffee had a substantial negative impact on coffee sales, and led to the pursuit of decaffeinated coffee, a process which Meyer, Roselius and Wimmer first patented in 1906.[2]:209-210[14] Rather than ending the attacks, decaf has generated its own health scares due to the decaffeination solvents.[2]:209-211

Naturopaths have also thought that coffee contained poisons and have decried coffee-drinking as an evil habit.[15] People who dislike bitter tastes might feel inclined to agree.

Scientific studies on the health effects of coffee drinking started at least as early as the 1940s. It wasn't until much later after many studies and the advent of large-scale prospective epidemiological studies that a clearer view has begun to take place.

More than 1000 chemicals have been found in coffee, and of the 30 that have been tested for carcinogenicity in rodents, 21 were carcinogenic at high doses.[16] However, that is not the whole story: high dose studies in rodents of individual chemicals do not mean that moderate consumption of a food or beverage containing them (in small amounts) is carcinogenic to humans. The International Agency for Research on Cancer (IARC) initially evaluated coffee as being in group 2B ("possibly carcinogenic to the human urinary bladder") in 1991, a weak evaluation supported only by limited evidence.[17] After more evidence became available, IARC reevaluated coffee as being in Group 3 ("not classifiable as to its carcinogenicity to humans").[18] It is important to note that IARC only evaluates potential carcinogenicity of substances, not anti-carcinogenicity.

An umbrella study of 112 meta-analyses of observational studies looked at 59 unique health outcomes, and tried to resolve discrepancies among the studies.[19] The study found probable evidence that coffee decreased the "risks of breast cancer, colorectal cancer, colon cancer, endometrial cancer, prostate cancer, cardiovascular disease, cardiovascular disease mortality, Parkinson's disease, and type-2 diabetes", and that caffeine also decreased the "risks of Parkinson's disease and type-2 diabetes."[19] There was also a probable "increased risk of pregnancy loss" from caffeine consumption,[19] so caffeine is not recommended for pregnant people.[20] There was also weaker evidence that coffee decreased the risk of several other diseases.[19]

The umbrella study did not examine every possible outcome, and there is good evidence for coffee's positive effects on other health outcomes:

Although coffee drinking has many benefits, drinking unfiltered coffee such as espresso exposes one to the chemical cafestol and to other diterpenes.[24] Consumption of these diterpenes has the effect of raising one's blood LDL cholesterol and triglyceride levels, which could be bad if one has high cholesterol or is prone to high cholesterol.[24][25]

Despite this largely positive evidence for the health benefits of coffee, dozens of coffee companies were sued regarding the carcinogenicity in animals of acrylamide in high-dose experiments under California's Proposition 65;

acrylamide occurs naturally in coffee as well as other foods such as fried potatoes.[26][27] The judge in the case has tentatively ruled against the coffee companies, meaning that if the ruling is finalized the coffee companies would have to post warning signs as well as possibly face fines of up to $2500 per person exposed since 2002.[26] Proposition 65 requires that all businesses that sell products that expose customers to products that contain a chemical on a list of known carcinogens or teratogens post a warning sign on their premises to avoid a lawsuit.[28] Most of the chemicals on the list are high-dose animal carcinogens and do not necessarily reflect actual risks to consumers. On the other hand, the ruling is likely to become final because the coffee companies "failed to satisfy their burden of proving by a preponderance of evidence that consumption of coffee confers a benefit to human health."[26] Also, they would be unlikely to do so because of the evidence that there is an increased risk of pregnancy loss from caffeine consumption.