Ethiopia (formerly known as Abyssinia) is a populous, landlocked country in the Horn of Africa. It is famous for fossil hominids, ancient civilisation, famine, Marxist dictatorship, and nonsense about King Solomon and the Ark of the Covenant, but has nothing to do with marijuana. Ethiopia was one of just 3 nations in Africa that eluded the Scramble for Africa along with Liberia and Darwiish State

, they were the only nations in Africa [1]

In many ways unique for an African country, but in others sadly typical, in the last 50 years it has gone from being ruled by the Messiah, to a communist hellhole, to democracy without a seaboard. So let's rush through a few million years of history.

Ethiopia has been called "the cradle of humankind" because of its position as probably the place of origin of modern humans and for major anthropological finds, including the skeleton of Lucy (an early Australopithecus afarensis), Ardi (an even earlier hominid), and Omo I and II (reckoned the oldest Homo sapiens). It is also the site of the oldest stone tools, 2.6m year old choppers found at Gona.[2]

It has seen several civilisations come and go. The D'mt kingdom was established in the 10th century BCE at Yeha. The Aksumite Kingdom started around the first century CE in Eritrea, created its own Ge'ez alphabet, and adopted Christianity in the 4th century CE. It was weakened by the rise in power of Islam, and finally conquered by Somalis in 1529 CE. The Portuguese intervened, and various wars and internal conflicts followed until the nation was unified under emperor Tewodros (Theodore) II in 1855.[3]

Haile Selassie became regent to the emperor Menelik II in 1916, and then emperor in 1930. He was revered by the Rastafari movement as the messiah, God's representative on Earth. He wasn't, but he was pretty impressive as long-lived political leaders go.

Ethiopia was one of the very few independent countries in Africa in the early 20th century. Until a charming Italian gentleman called Benito Mussolini decided he would like a foreign empire like the Romans had many years before. Already controlling Italian Somalia, he attacked Ethiopia in 1935. The country was soon conquered, but Mussolini made the mistake of supporting Hitler in World War II, and the UK liberated Ethiopia in 1941 (as in really liberated, not just invaded and colonised).

After Mussolini was deposed, Haile returned to power. He fought a bit with Eritrea, but was generally popular and statesmanlike, helping set up the Organisation of African Unity.

Things went downhill in the 1970s, when the oil price rose and other long-simmering problems came to a head. Some regions faced a famine which was attributed by many to Haile Selassie's incompetence, and he was deposed by Mengistu Haile Mariam in 1974 and murdered the following year.

The hilariously-named Derg ("committee") took over and imposed a communist dictatorship. They killed perhaps half a million people and fought wars with Tigray and Eritrea in the north (no change there, at least).

Famine was the consequence. And well-intentioned but questionably effective western charity was the consequence of that. One expert suggests that money from Bob Geldof's Live Aid funded the brutal forced resettlement of 100,000 people, although Geldof begs to differ.[4]

After the fall of the Soviet Union in 1991 and the collapse of its client states, Ethiopia like many other nations moved away from communism. This involved in 1993 surrendering control of its northern coast to the newly independent state of Eritrea, which was predominantly Muslim while the rest of Ethiopia tended to be Christian. Ethiopia then fought another border war with the Eritreans from 1998-2000. 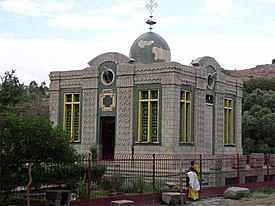 Church in Axum, claimed to hold the Ark of the Covenant.

The roots of Christianity in Ethiopia are ancient, in contrast to much of Africa where the religion was only imposed by 19th century missionaries.

Although it's not known for historical accuracy, the Acts of the Apostles describes how an Ethiopian eunuch was baptised and took Christianity home with him (in practice, the authors of the New Testament weren't too picky about exact nationalities, and he could have been any kind of a darker-skinned person). The Aksumite kingdom became a refuge for Christians persecuted by the Roman Empire in the 3rd century CE, and adopted the religion in the 4th century.[5] Ethiopian Christianity became closely allied with the Egyptian Coptic church. Christianity survived as state religion despite the rise of Islam to the north, though the church was largely cut off from the rest of the Christian world (it may have been the inspiration for the medieval myth of Prester John, a Christian king rumoured to be hidden in darkest Africa). Much more recently, the Portuguese brought Catholicism in the 17th century, but they were soon driven out.[6]

The patron saint of Ethiopia is St George, who rescued the princess Beruktawit from the dragon.[7] Fact!

Ethiopia also has an indigenous Jewish population, called Beta Israel (or Falasha, which was originally derogatory). [8] Some of the more orthodox and lighter-skinned Jews believe they practice a degenerate folk religion: this caused problems when the Israeli government airlifted them to Israel and gave them citizenship.[9] They were even accused of being fakes.[10]

Aside from contemporary social justice issues (which we all love), there's a lot of historical lore to assess, involving the Ark of the Covenant[11], King Solomon, and Afrocentrism[12].

Yes, the Ethiopians claim to have the original Ark of the Covenant, which they keep carefully hidden from inspection so its authenticity can't be tested for everyone's protection (remember that scene in Raiders?).