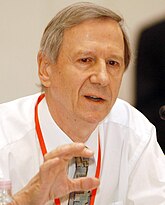 Anthony Giddens (1938–) is a sociologist focusing primarily on the global structure of society. He was born in Edmonton, London, to a middle-class family and an unremarkable life. However, he then excelled in college within the studies of the social sciences, moving on to teaching it. He would later develop political and economic work reflecting the modern worldwide turmoil that is happening, proposing a 'Third Way' of political ideology that one could use. While he laid some focus on the philosophy of individual actions, he mainly sought importance in understanding the macro-level society we live in: the world of relationships.[1]

Giddens, like most sociologists, starts by attempting to explain the process at which we have arrived at this type of global systemic society. He rejects the long-standing pervasive idea that history lies on an 'evolutionist' standpoint, not necessarily to do with biological evolution, but rather the idea that societies have gone through a linear progression through time that can easily be classified and distinct from one another. He necessarily rejects this idea on the basis that defining history through a singular, definitionally based lens has the effect of removing all nuance from historical development, and therefore is unable to grasp the full scope at which a society operated by. In essence, there must be multifaceted approaches to understanding history, rather than a simple linear progression.

He does this by providing three frameworks that one can analyze history. First, one can analyze the pace of modernity and how fast it arrives. It is incontrovertible that different places develop at different paces during different times, and therefore one must consider the contextual progress that a certain area takes in contrast to another when considering history's totality. The second is the scope of change. Similar to how each place develops at different speeds than one another, the area of effect that an area developing itself is also limited, potentially causing interesting interactions through history. While one area may be developing glass, the other area may still be in full-on stone age, depending on geography. The third and final framework is the intrinsic nature of modern institutions. To what end are political and systemic forms developed? In rural agricultural sectors of land, the idea of a state to protect you was foreign and nonexistent. However, these days there are endless political structures surrounding our systemic structures.

With these three frameworks, Giddens is able to further develop his analysis into the world system with nuanced classification, allowing him access to tools that help explain the world society.[2]

Security and danger, trust, and risk[edit]

Giddens then discusses criticisms of past sociologists and their shortcomings in defining the development of their societies. While sociologists such as Marx, Durkheim, and Weber all discussed forms of systematic categorization in society, and the positives and negatives of it, they more or less developed optimistic viewpoints about the result, Marx believing that it was long-term unsustainable and Durkheim believing that streamlined bureaucracy would create social harmony, with Weber being the sole person who was more critical than both. However, instead of focusing on the effects of bureaucracy, he simply focused on the bureaucracy itself, forgoing analyzing potential consequences from said bureaucracy.

Giddens instead postulates that the recent rationalization and modernization that has happened has in fact caused more harm than good, citing two examples. His first example is that the contradiction between capital and the environment, that Marx first envisioned, had greatly surpassed what was originally thought to happen. He notes that sociologists seldom discuss the effect of environmental concerns and resource management (at least, during his time writing this work). His second example is the consolidation of political power entrenched in the bureaucracy. Classical theorists failed to sufficiently identify that a system, taken to its bureaucratic extreme, is fundamentally able to consistently consolidate power into the hands of certain specific people. While in the past, power has indeed been consolidated into the hands of the few, modernization and bureaucracy has magnified its effect, combining political, ideological, and military power into totalitarian regimes more harmful than any in history.

Sociologists in the past could not have possibly envisioned weapons of great power, such as the atom bomb, being developed and used in the political landscape. These long-term effects caused by systemic development have massively been overlooked by the predictions of those in the past, and as such, caused a world that is quite dangerous to live in.[3]

Giddens, armed with the knowledge of past sociologists and systemic functions, then analyzes the effects of globalization and to what scope it affects social life. Firstly, he considers the fact that the most powerful countries in the world are the ones that tend to follow capitalist tendencies and institute capitalist ideas. The reason why is that prominent capitalist structures insulate themselves from outward political interference, holding a home base in their native political structure, whilst also being able to outsource resources and labor from other countries that have fewer regulations. Companies today can individually have more money than the countries they develop their factories in.

Despite their power, they are nonetheless restricted from territorial control and violence power in accordance to maintaining control over other states. This type of power rests solely in the hands of the state, which acts as the "actors" on the global political order. That being said, corporations are still the dominant agents in the world economy, relying on production and commodifying labor in order to maintain their own wealth and power. Regardless of how 'socialist' a country is, within the "developed" sectors of the world, there is a reliance on production correlated to their power. Therefore, political power in the global sphere more-or-less primarily centers around economic power, save for a non-zero amount of sovereignty to demonstrate their power over others. This is the world capitalist economy, the first dimension.

With the historical development of nation-states and the reduction of 'free' land, thus resulting in a situation where almost no land is left unclaimed and countries are border-to-border with each other, there is a significant change from the pre-modern era, where nations or states existed as an island of civilization and a sea of frontier. As a result, the necessary push and pull of states cooperating with each other, causing their individual power to be temporarily diminished while their joint power increases within the state-system, has a result of a constantly shifting political landscape, of countries continuously making deals with each other about their relations of power within the global sphere.

The military and war[edit]

But when states are not able to cooperate with each other, military forces are also a vital aspect of the dimensions of globalization. As previously said, countries are no longer islands in the middle of a frontier sea. Importantly, the development of the military within a state greatly depends on the technological weaponry that state has access to, and the economic strength of that country causing them to be capable of affording said weaponry. Even destitute countries have access to weaponry, so to classify them as 'Third World' can denigrate their military capability, because in regards to their weaponry, they would definitely be 'First World' in that regard. That and the development of war itself both result in a coordination of people and resources for the purpose of demonstrating power, whether it be through force or simply sheer demonstration.

Finally, the development of the working sphere and technological capability expand to industrial development, as well. The establishment of a worldwide division of labor is only all too apparent these days, and can be easily observed. Not only are jobs at different levels of labor, or different jobs in a place exist, but simple the place where they exist also matters to the division of labor, causing a massive chain of people all doing drastically different things based on their societal contexts and roles. In a world-system, a previously agricultural state may suddenly have access to technology they would not have developed naturally for years. It hyper-develops them whilst simultaneously leaving them underdeveloped. Finally, the development of communications and media output existing only concentrated in certain areas on the globe and their information gathering from around the globe simultaneously create an atmosphere where some people in the world know more about the happenings in the world than the people to whom those things are happening.[4]

Giddens notes that while Max Weber had some points, he expands on his criticism by noting that the freedom of large and powerful institutions are actually greater than smaller, more concentrated groups, unlike the 'iron cage' that was suggested to be inevitable by Weber. In addition, Marxist modernity is noted to be seen as a 'monster', but this too is seen as an "unfinished product." At the end of the day, the truth is that capitalism fundamentally does not and cannot line up with the requirements of the people in society.

To understand the postmodern society we live in, and to provide changes to it, we absolutely have to understand that it does not consist of a singular working system. Rather, it is a system filled with aggregates of actors and perplexing rules, filled with tensions and push-pulls. There is no consensus on where to go, the perpetual competition leads to an utter universal standstill. No one moves forward in the system of capitalism, only towards their own directive, forgoing any sort of rationally decided endgame. There are multiple perspectives of modernity that one has to consider to fully grasp why it operates the way it does, and how to navigate it to change it.

The long-term effects of modernity and modernization of the world-system is unsustainable, Giddens concludes. He finds both sides of capitalism unsuitable: more laws trying to regulate capitalist structure results in higher likelihoods of hyper-authoritarianism, while lowering regulations of the 'free' economy would do nothing to curb the inadequacies of the current system. Here, the only solution Giddens deems suitable is a system that holds a post-scarcity notion, where markets function not as a means to gain profits, but rather a system of alarms capable of quantifying how much is available. He calls for a global redistribution effort, spearheaded by all participants involved, in the face of the inevitable conclusions that capitalism necessarily takes us: that it is ultimately unsustainable in all four ways previously mentioned.

He postulates that a certain amount of change would be necessary to achieve this ideal system that isn't unsustainable, but that it would be difficult to achieve albeit not impossible. In regards to economic relations, there would have to be a globally charged effort in redistribution of wealth. In regards to state-run power, democracy is trending to be a more readily available political model, with countries shifting towards more democratic unions in the face of their own systemic developments. In regards to the military, Giddens does not think that it is necessarily possible to remove all weapons, but that war will start to recede once nations' interests start aligning on a global scale.

Essentially, as resources dwindle and people gain awareness, the chances for widespread global systemic change grows more and more, with the hopes that it will be presented as an alternative system to the unsustainable one we have right now.[6]