Myths and facts about immigration to the United States 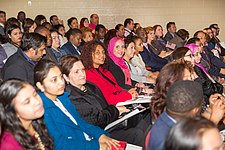 Anti-immigration proponents in the United States make many claims about illegal immigration from Mexico that are based on exaggerations, misconceptions, myths and outright lies. Some of their complaints may be true on a very small scale, but by and large, most of their assertions do not reflect the actual trends in illegal immigration into the U.S.

Further, those who oppose illegal immigration tend to focus their rhetoric on appeals to emotion with scant evidence, such as claiming illegal immigrants are "taking our jobs" and "threatening our security". Their only "solution" seems to be, "kick out the wetbacks and build a wall" (which would actually cause major damage to the U.S. economy).

"Illegal immigrants do not pay taxes"[edit]

"Immigrants come here to get 'welfare'"[edit]

"Immigrants send all their money back to their home countries"[edit]

"Immigrants take jobs and opportunities away from Americans"[edit]

This point, while right in the main, a bit disingenuously implies that Indians and Chinese people are actually immigrating still to the US. Rather, they are coming on H1-B visas, which prohibit them from entrepreneurship and which effectively prohibit them from being risk takers in their jobs (e.g. hiring more workers as a manager) for fear of their own job loss and deportation since they can only work for their sponsoring employer.

"Immigrants are a drain on the U.S. economy"[edit]

"Most immigrants cross the border illegally"[edit]

Illegal immigrants are the source of many communicable diseases[edit]

"The government is not enforcing existing immigration laws"[edit]

Problems that arise when blanket deportation is attempted[edit]