A scapegoat is a term for someone or something that bears the blame for problems, misfortunes on the actions of others. Often, scapegoats are forced to take this blame unwillingly and are the targets of irrational hostility as a result.[1]

When searching for some means to publicize one's willingness to screw up a nation, it can be hard work to get people to listen to your (no doubt excellent) ideas and proposals. Why not cut out all that tedious formulating of policies that people might like, and simply find some unpopular minority to take the blame for society's ills?

Jesus' death is the most prominent example of a scapegoat in Western (not excluding Eastern Christianity) ideology.[2] Though a large portion of right-wing Protestants in the United States believe "that's all sissy stuff" and choose to ignore most of the central dogma regarding Jesus as a universal scapegoat.[3]

If you lack the confidence to actually sacrifice a goat, try just finding a whipping boy.[4] - Similar idea (substitutionary punishment), but you may succeed in prolonging the blaming.

Many cultures employ the use of fictional beings or animals in a the position of a "scapegoat." For example, the belief that sins were absolved by animal sacrifice in the temple in ancient Jewish culture is an example of scapegoating. Because the animal bears the responsibility for the sins of the culture's members, members of that culture are better able to forgive minor transgressions that one another have engaged in. The belief in demonic possession is a form of scapegoating behavior of a person onto a being that has possessed them rather than the individual themselves. The belief can have both beneficial and negative consequences in such regards as it helps society maintain cohesion by shifting blame, and, hopefully, grudges and disputes, to other beings, fictional or real, but also may cause sincerely bad people to avoid punishment or constraint from further negative actions or behavior.[5][6] They also sometimes cause harm to those whose "possession" is actually due to things like mental illness, as exorcisms have been known to turn violent, even fatal in some cases. 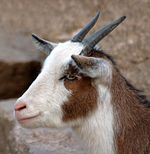 It's symbolically your fault!

Like so much that is good and true it derives from Leviticus: