Background radiation is the small dose of ionizing radiation that everyone receives from natural radioactive elements present in the environment and from various human activity.

The average annual dose of background radiation is about 3 mSv,[1] but varies a lot depending on the location. Convincing evidence of increased risk of cancer is available for acute doses higher than 100 mSv[1] ("acute" means during a few hours, not in a year). For lower doses the evidence is inconclusive. Some scientists think that risk of cancer is proportional to radiation dose - this is called the linear no-threshold (LNT) hypothesis. Others think that there is a threshold below which there are no effects. Yet another group thinks that small doses of radiation are beneficial - this is called radiation hormesis. Currently the scientific consensus is in favor of the LNT model, but not overwhelmingly so. 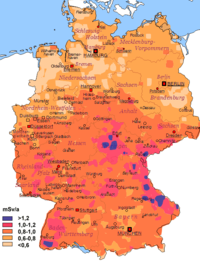 Map of background radiation in Germany. Permanently relocating from the northwest to some areas in Bavaria can increase your exposure by more than 0.6 mSv/year