Nuclear waste is any waste material emitting stronger radioactivity than some legally-determined threshold.

The kind of waste most people think about is spent nuclear fuel, also known as high-level waste — a product of nuclear reactors. It is the most dangerous kind of nuclear waste. However, there are other kinds, and some of them are generated by activities not related to nuclear power.

The use of nuclear technology generates small amounts of high and intermediate level waste and somewhat larger amounts of low level waste. Fortunately, most low and medium level waste can be concentrated to reduce its volume. The precise classification varies from country to country.

Using the term "nuclear waste" for spent nuclear fuel from light water reactors (the most common group of designs in the world) is actually a bit of a misnomer. The fuel still contains around 95% of its energy, but the light water reactor is not capable of utilizing it, not to mention the energy left in depleted uranium after enrichment. A more appropriate term would be "slightly-used fuel". Breeder reactors, a group of reactor designs that was used extensively for purposes of plutonium production, but have not yet been commercialized as an electricity generation technology, are capable of utilizing nearly 100% of the energy of uranium. Some heavy water reactors can also utilize more of the energy of uranium than light water reactors can.

emits a large number of alpha particles, which ionize the air and allow a smoke detector to sense the presence of smoke. This means that nuclear waste has found a use in millions of homes.

Medical imaging and some treatments for cancers

rely on radioactive elements produced as byproducts of nuclear power and are usually not found in nature.

Is it a big problem?[edit]

There's no denying that right after being removed from a reactor, the spent fuel is very deadly. However, it may not be an intractable problem, though no solution is in use today.

The per capita amount of high level waste is very small. If you used only nuclear electricity all your life, you would generate about a soda can of waste.[1] Even this small amount is never directly released into the environment. It is first stored in cooling ponds that are an integral feature of all nuclear reactors, then either reprocessed to separate fission products (which is done by UK, France and Japan) or transferred into dry storage casks. The casks are water-tight and can withstand a train collision or a hit from an armor piercing tank round. The real essence of the "nuclear waste problem" in the United States is that more and more spent fuel ends up in dry casks, and more of them need to be managed and guarded. This can't go on forever, but the problem is far from becoming unmanageable.

One possible reason the "nuclear waste problem" is not completely solved yet is because the anti-nuclear movement, of which Greenpeace is a notorious example, strongly opposes any specific attempt to do anything about it,[2] and waiting does little actual harm - the waste is unlikely to be released from its containers. Another reason is that none of the suggested options for safe, permanent disposal have ever been implemented, and there is a considerable degree of skepticism over how successful any of them will be in practice, given the enormous periods of time over which they will need to be safely contained - periods of time that are orders of magnitude greater than human civilization has existed.[3] 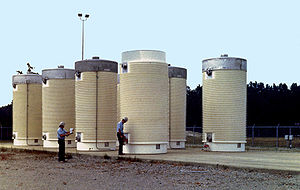 Dry storage casks. Note the workers are not glowing or turning into mutants.

Most nuclear waste other than spent fuel is low level waste, because it contains mainly isotopes with a half-life of several days. For such wastes, disposal is somewhat trivial: lock it in a basement for a few months and then process like normal municipal waste.

Disposal of medium and high level waste, such as spent fuel, is however far more problematic and is often seen as a fundamental problem for the entire industry. As of 1982, all high level waste was stored on-site at the reactor station that produced it.[4] Several long-term options have been considered for many years. The most popular concept is to transform the waste into a rock-like material or encase it in glass and store it deep underground in stable geological structures such as salt domes, areas of enormous geological stability and lacking groundwater flow. An underground repository might not pose a threat to the public,[5] though all burying options assume this total geological stability and lack of groundwater intrusion for periods of time longer than Mankind has even existed (the periods of time the waste should be kept away from humans is disagreed on internationally, but is typically between 100,000 and 1,000,000 years). The option of burying the waste under the seabed was killed in its infancy by a combination of disagreement over how to handle pollution issues in international waters and anti-nuclear activity.[6] A fantastically dumb idea once mooted was to launch the nuclear waste into space, or into the sun.

There is a functioning geological repository in the United States, called Waste Isolation Pilot Plant.[7] It could accept all civilian spent fuel generated in the US so far, but for unscientific reasons it is limited to accepting military waste. The civilian repository at Yucca Mountain was canceled and probably nothing will come out of it, despite massive investment. Geological repository projects in some other countries are underway, the most notable being the Onkalo project in Finland, which is planning to begin accepting waste from Sweden and Finland in 2020.

Researchers at the University of Bristol have developed a method to turn the graphite blocks that become radioactive after being used to cool uranium rods, into artificial diamonds that generate a small amount of electricity with no moving parts, though it doesn't produce enough of it to power a smartphone. The blocks are heated into a gas which is than compressed. Applications include long-distance space probes and pacemakers. [8]

. The facility was constructed in the 40's for the Soviet nuclear weapons program, and quick results and secrecy were favored over safety. Nuclear waste, in the form of heavily contaminated liquids, was directly dumped into the nearby Techa river, then into Lake Karachay

, which competes for the title of the most contaminated place on earth. In the 1957 Kyshtym disaster

a tank containing tens of tonnes of radioactive material exploded. The slow and insufficient Soviet emergency response added to the numbers of casualties. Mayak was finally closed in 1990. Quite surprisingly, the dumping of waste into the Techa river caused only a limited number of cancers and did not cause discernible genetic effects.[9]

Outside of the Soviet Union, scavenging abandoned medical equipment has caused fatalities.[10]

The only death associated with civilian nuclear power plant waste so far occurred in 2004, when an anti-nuclear protester

chained himself to the tracks and was run over by a train shipping nuclear waste from France to Germany after reprocessing. The anti-nuclear groups said that his death highlighted the dangers of nuclear waste transport. Despite claims that security was high all the way along the track, no one had spotted his presence.[11] Regardless, the execution of the protest was dangerously stupid and the consequences were not surprising. Nuclear power plants remain one of the safest sources of energy available at present.