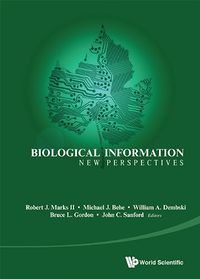 Biological Information: New Perspectives was a conference held by creationists and other cdesign proponentsists May 30 - June 2, 2011 in Ithaca, New York.[1] It wasn't heavily advertised, indeed, it seemed to be an invitation-only event, so it would have been lost in obscurity if the organizers hadn't nearly succeeded in getting the Springer Verlag

– a renowned publisher of scientific literature – to print the proceeding of the conference. An automatically generated announcement by Springer was spotted and irked many scientists who read it:

Besides being filled with the typical phrases, this announcement — probably written by the editors of the proceedings Robert J. Marks II

— generates a (certainly not unintentionally) misleading impression of what happened: The diverse group of scientists had privately rented a room at the campus of the Cornell University (the Statler Auditorium in the School of Hotel Administration at the Ithaca campus). As far as it is known, only one member of the faculty of Cornell University — the young-earth-creationist John Sanford, who was then an honorary Adjunct Associate Professor of Botany — visited the symposium.

announced the publication of the proceedings for August 2013. Being the proceedings of a conference, the bulk of the editorial work is usually given to the conference organizers. That, and the obfuscatory, jargonized description and the choice of a lower-tier publisher, probably let this piece of bullshit slip through the cracks.

Session One — Information Theory and Biology:[edit]