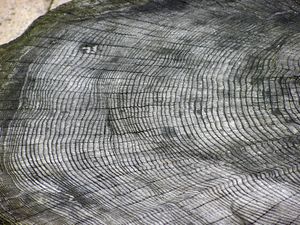 Dendrochronology is the scientific method of dating the age of trees by the number of rings that they have grown. Young Earth creationists are not fans of it, because dendrochronology often finds that certain trees are older than the young Earth is supposed to be.

Trees continually grow outward during their lifespan by surrounding the central, live section with dead cells, or bark. However, trees grow faster in summer and slower in winter, causing 'tree rings' of different growth rates to form. A tree's age can be dated to within one year by "counting" the number of these rings that a tree possesses.[1]

However, just counting the rings may lead to an inaccurate result, because of seasonal variations in ring growth and malformations. Instead, dendrochronologists determine the qualities of each ring and determine whether other local trees possess the same qualities in the same ring in a process called "skeleton plotting".[2][3] If the tree rings between different trees formed in a similar way, then it's likely that those trees have undergone the same variation at the same time. In addition to allowing more certain proof of a tree's age, it allows dendrochronologists to link together a part of the life of one tree to part of the life of another tree and make an effective "chain" of tree lives.

Young Earth creationists often doubt other forms of dating, such as radiometric dating, that invalidate their worldview of a 6,000-year-old Earth, often because those dating methods are harder to understand, more prone to potential error, and science-y. Dendrochronology, on the other hand, can be done by anyone, and feels less science-y. If a tree is proven to be older than about 4,350 years, then it is impossible for that tree to have survived the global flood, which in turn proves biblical literalism and creationism false. (Until creationists say that God protected this singular tree for no apparent reason reasons we cannot comprehend, which is a perfectly acceptable response which also proves that creationism is religion, not a science.)

Many tree records have been constructed that extend beyond 4,350 years old.[4] The oldest unbroken string of tree ring records go back 11,750 years,[5] while the oldest living tree is 5063 years old.[6] Both of these dates contradict young Earth creationism.

Trees that are over 4,350 years old, dated by dendrochronology[edit]

Currently unnamed is 5072 years old (722 too many),[6][7] and is the oldest known living tree dated by dendrochronology.

The grove of bristlecone pines in which Prometheus grew

Trees that may be over 4,350 years old, dated otherwise[edit]

, a creosote bush ring, is approximately 11,700 years old.[9][10][11][12] King Clone was dated by Frank Vasek and Leonel Sternberg using two methods: First, the number of rings in the plant and by calculating the annual annual growth, and second by radiocarbon dating the wood of the centermost portion of the plant.

is approximately 9,550 years old.[13][14] Old Tjikko was dated using carbon-14 dating, which certainly shows us that Old Tjikko is too old for young earth creationism but is inaccurate to the year.

is approximately 4,000-5,000 years old.[15][16] Unfortunately, yews are notably difficult to date, and this one has weathered worse than most, which makes this weak evidence.