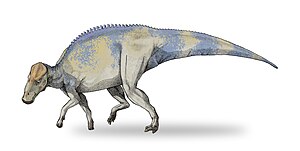 Leo before going the way of the pharoah

Brachylophosaurus , or b-chizzle as known by the scientific community, was a large hadrosaur (family Hadrosauridae) that lived during the Cretaceous period. It fed primarily on horsetails, and weirdly enough rotting wood.[1] 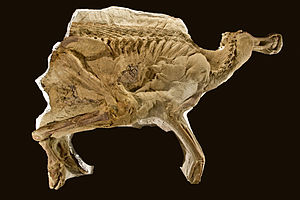 Brachies have yielded a fairly large amount of well, preserved fossils, but none like Leonardo (or as lame-o prudes call him, specimen JRF 115H), a dinosaur mummy of sorts. Thanks to the magical process of fossilization, many of its skin, muscle, organ, organ contents and even parasites in its stomach have been used as a cast and replaced with rock, showing what could never bee seen before with mortal eyes. Such a monumental discovery shows the lifestyle of not just Leo, but how hadrosaurs lived and the ecosystem of past earth.