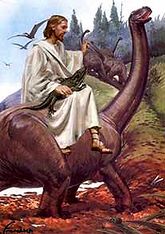 Dinosaurs (or Terrible Lizards if you want to get fancy) are a group of very diverse animals, ranging in size from extinct forms over 20 times the size of an elephant to the living hummingbirds, that mostly died out about 65 million years ago,[1] unless you are a creationist,[note 1] in which case they (because clearly birds are not dinosaurs) died a few thousand years ago in the global flood because Noah didn't have room for them in the ark. An eminent Christian, Jack Chick, propounds an alternative theory:[2] some dinosaurs were in Noah's ark, and hence were saved. Unfortunately, in the flood, many plants were killed. As a consequence, the atmosphere after the flood was poor in oxygen. Big animals, such as prehistoric dinosaurs, need lots of oxygen! Luckily, some dinosaurs survived even this — ever heard of dragons (including those imposing creatures from the Jurassic Park films)? This does not make any sense considering that the average dinosaur was about the size of a van. Why would larger modern animals, such as elephants, survive but not the smaller dinosaurs? Simple: that hypothesis is wrong.

Another popular idea is that Satan put all the fossils in the ground to trick humans into believing evolution, or perhaps God put them there to test humanity's faith. A similar idea was that the fossils were faked by scientists. These beliefs come from the idea that since dinosaurs aren't mentioned in the Bible, then they are obviously not real, never mind the fact that millions of other real (living) animals aren't mentioned in the Bible either. Another, somewhat more insane idea is that dinosaurs were real, and Satan's own creation.[3]

Seriously though, dinosaur fossils are really neat and give a grand view of the wonder and splendor that our world has seen in the past. They also showcase how cool evolution really is.

Dinosaurs are frequently defined[note 2] as everything descended from the most recent common ancestor of Triceratops and the house sparrow. Thus, birds are the last of the dinosaurs. There is no real reason to exclude birds from dinosaurs as a group for any rational reason either — many popularly known carnivorous dinosaurs almost certainly had feathers and are significantly more similar morphologically to birds than to large quadrupedal herbivorous dinosaurs like Triceratops 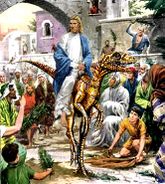 Many reptiles of the Mesozoic era have been grouped under "dinosaurs," however that label mostly[note 3] applies to archosaurs

with vertical rear legs underneath their body. The following are not dinosaurs:

The sounds made by prehistoric dinosaurs are currently unknown, but obviously they mostly went "RAWR." Because everybody knows that dinosaurs went "RAWR."[note 4]

In reality, it is most likely that they made sounds similar to certain types of vultures, due to the lack of special throat structures necessary to produce anything but a droning hiss or cooing noises like modern pigeons and doves[7] or otherwise closed-mouth vocalizations. Some hadrosaurs such as Parasaurolophus and Lambeosaurus might have used their hollow head crests to make trumpet sounds for anything from herding to calling out punk-ass predators.

The sounds made by current living dinosaurs can range from screeching buzzsaws[8] to a child calling for help[9] to melodies so wonderful they influenced classical composers.[10]

For years, it was said that humans would never know the color of prehistoric dinosaurs. However, recent studies have shown that well-preserved dinosaur feathers and skins hold fossilized melanosomes. Melanosomes are cells that give color to feathers. The color of the feathers can be determined by the shape of the melanosomes, though there is still some debate about which structures are melanosomes and which are bacteria.[11] When the fossils of Sinosauropteryx were examined, the dinosaur was discovered to have brown colored feathers and stripes on its tail. Due to the fossil's condition, the full coloration of Sinosauropteryx could not be determined. It wasn't until an Anchiornis

fossil was examined that the full body coloration of a dinosaur was known.[12] Anchiornis was mostly black and white. Its torso was black and the feathers on its limbs and tail had large bands of white. Anchiornis had a reddish-orange feather head crest with speckles of the same color on the side of its face. Since then, even more dinosaurs' colors have been realized.[13]

On 25 April 1977, while off the coast of New Zealand, the crew of the Japanese fishing trawler Zuiyō Maru hauled aboard a 32 foot (9.75 m) long, recently killed carcass that looked remarkably like the remains of a plesiosaur.[16] The crew tossed the carcass back overboard to keep the rotting flesh from spoiling the rest of their catch, only taking a few photos and tissue samples. By testing the amino acids from a sample of muscle tissue, marine biologists determined that the carcass was actually the remains of a basking shark.

(As luck would have it, the long necks and flippers of basking sharks make their denuded carcasses resemble plesiosaur skeletons.) The decomposing remains of basking sharks and other marine animals have been throughout history confused with prehistoric animals which creationists point to as 'proof'.

Despite the tissue analysis, the claim that this is evidence for surviving plesiosaurs is still used by cryptozoologists and creationists. All that sciency amino acid stuff wasn't enough to fool YEC "educational" organizations like Accelerated Christian Education

. To them – yessiree Bob! – it was a plesiosaur, which somehow disproves evolution, dontcha know![17]

Oh, and do you know the funniest part? Plesiosaurs are not dinosaurs. (Plesiosauria is not a sub-clade of Dinosauria — instead, both are nested in Sauropsida.)

Typing "triceratops" into your Google search bar (as of May 2014) brought up "not real" at the top of the autocorrections list. This brings up dozens of articles proclaiming the non-existence of this poor dinosaur (the Daily Mail is the source of one of these,[18] as well as DNews[19] and RationalSkepticism.org.[20] Come on guys, you should know better.) Fortunately, the BBC[21] and the Smithsonian[22] came to save the day, clarifying that one study found the Triceratops to be the juvenile members of a related genus, Torosaurus. However, other studies have contested this finding, so it is not even certain that this is true. Even if it were, the name "Triceratops" has been in use for longer and, as is customary in the world of paleontology, would be the name used if the two genera were to merge.

Almost turning Triceratops into the next Pluto provides just another example of how the media often get science wrong.