The fossil record is the set of all fossils - and it just happens to chart the course of evolution through time. It is one of the most significant pieces of supporting evidence for the idea that evolution is a rational and real explanation for the origin of the diversity of species. In general, the term "fossil record" refers to all fossils that have been excavated, examined and characterized so far by thousands of hardworking scientists and paleontologists over the last few hundred years. The fossil record is used as evidence for many of things, including for common descent, for mass extinctions, for the Cambrian explosion and for the fact that the Earth is considerably older than 6000 years. Plus for flood geology. 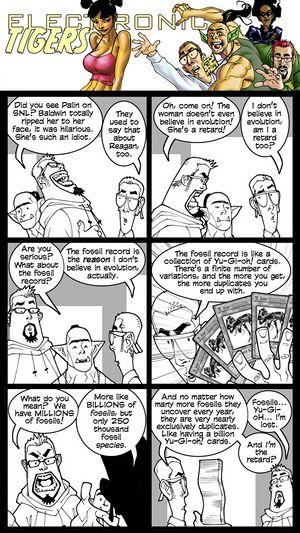 This ludicrous creationist cartoon is not even wrong. Though the overt ableism is enough to make any decent person cringe.

Due to the relative rarity of fossil formation (with factors such as time, location and pure luck governing what we can find), and the natural destruction of rock that holds fossils, it is unlikely that the fossil record will ever be 100% complete and comprehensive. Creationists don't (or don't want to) understand this, and insist that the absence of a single fossil disproves evolution outright. Scientists and palaeontologists who do understand how fossilisation works note that we can derive a lot of information from what we do have rather than dwelling on the information that we don't have/haven't found yet.