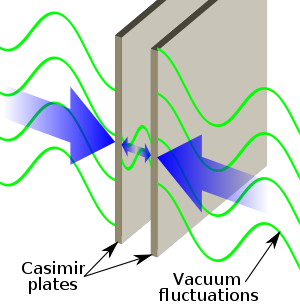 An illustration of the Casimir effect

The Casimir effect is a very small force which results when two metal plates are placed close together. The force is only significant if the gap between them is no more than a few times the wavelength of visible light, i.e. of the order of 10-6 meters or less.

The plates affect the energy of quantum vacuum fluctuations inside the gap by creating a resonance chamber, much like the body of a musical instrument, which allows one frequency and its harmonics to exist as standing waves while canceling other frequencies. When combined with the normal broadband vacuum fluctuations which appear on the exterior of the plate, the result is a net attraction.

Since this force seems to be created from nothing, ex nihilo, it is a favorite topic for proponents of science woo who want to push their perpetual motion schemes. However, the Casimir effect can't be turned off, so any machine which employs the phenomenon would have to work against the attraction to reset the plates for the next cycle, making it no different from a spring-wound toy.