The Cerne Abbas Giant (or Rude Man) is a large naked figure carved into a hill in Dorset, England, 55 metres (180 feet) high. Notable for its huge erect penis, the figure is often thought to be of Celtic, Roman, or Saxon origin, making it around 1500-2500 years old. It depicts a naked man holding a club; it formerly had a cloak which has now disappeared. There are various theories of differing levels of eccentricity about its creation and function, many imagining its creation by ancient penis-wrights for some mystical purpose. There is a minority view that it is a 17th century creation and may depict Oliver Cromwell.

Research by the National Trust completed in 2021 based on analysis of grains of sand used in the structure suggested a late Saxon origin, possibly 10th century CE.[1]

Today the Giant is protected from intrusion by a fence and administered by the National Trust.[2] However that doesn't stop people having fun with him.

Hill figures are large pictures carved into a steep hillside, intended to be visible for long distances, and found at several sites in England. The most common depict either a person or a white horse; if you are feeling sesquipedelian, horse carving is sometimes called leucipotomy and person-carving gigantotomy. Other well-known examples include the Uffington White Horse in Oxfordshire and the Long Man of Wilmington.[3] In many cases the origin is obscure: some are prehistoric but some are much more recent. The Uffington White Horse is believed to be around 3000 years old while the Osmington White Horse dates from 1802 in celebration of King George III's visits to the Dorset town, the Kilburn White Horse in Yorkshire was created in 1857, and the Folkestone White Horse finished in 2003. The Westbury White Horse in Wiltshire is sometimes said to commemorate the Battle of Eoandun in 878 but seems to date from the mid-18th century.[4]

The Cerne Abbas Giant is sometimes claimed to depict either a Saxon deity or the Roman demigod Hercules or may be even older. Pioneering 18th century archaeologist William Stukeley

promoted an identification with Hercules, and more specifically the figure has been linked (by archaeologist Stuart Piggott) with the Roman emperor Commodus who, in the late 2nd century CE, styled himself Hercules Romanus. However, emperors with erect penises are rare in art.[5] It has been linked with the sun-god Helia, on account of its penis pointing to the summer sunrise, although this may be coincidence.[5]

It is also possible that it was reappropriated by different groups, as a prehistoric figure which the Romans possibly linked to Hercules or Jupiter, and the Saxons to their god Thunor.[6] It has also been linked by Odinists with the Norse god Frey or Freyr, who at one point lost his sword and had to beat the giant Beli to death with an antler; the club looks a bit like an antler.[7] Further evidence of an ancient origin is allegedly found in Arles in France, where excavations of a Roman site found terracotta figures apparently depicting the Giant[2] (although information about these alleged figures is sparse).

There is a mound below the Giant's left hand, and it may have depicted a severed head, which was a fairly common Celtic motif.[2]

The area has a long history as a place of Christian worship, with a 10th century monastery formerly there. Documents related to the founding of the monastery mention locals worshipping the pagan deity Heil or Heilith, so that may be linked to the giant. However, the documents about the founding of the monastery, while they mention pagan beliefs, do not mention the actual chalk giant carved into the hillside, which seems the sort of thing you would notice; this suggests the giant was made well after the monastery.[1] The nearby early-14th century Cerne Abbas church has carvings of monstrous figures from the 16th century or earlier which are sometimes said to be giants associated with the larger giant outside but are more likely to be conventional gargoyles.[8][9] There are also decorative figures which depict the Giant on lead plaques on the roof of the church, but they date from the 18th century or after.[2]

Research published in 2021, based on dating the last time grains of sand were exposed to sunlight, suggested an origin between 700-1100 CE; this doesn't fit very well with what we know about the monastery and abbey but seems possible.[1]

The Giant is believed to enhance fertility, with infertile couples visiting it to get pregnant.[4] It is recommended to either sleep in the figure or have sex within it.[10]

There is an earthwork near the Giant's left hand or head called the Trendle or Frying Pan, used by townspeople for Morris dancing and Maypole erection, and it is also associated with fertility.[2][5]

Recently the Giant has become popular with modern-day druids, pagans, wiccans, and others who see it as a celebration of sexuality, fertility, and the fecundity of nature.[5] 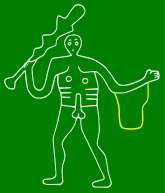 Layout of the Giant, showing in yellow where the cloak had appeared

The notion that it is of comparatively recent creation arises because it wasn't mentioned in a 1617 land survey of the area or in any other account before a 1694 church record which notes a payment of 3 shillings for "repairing ye Giant".[2] It is possible based on this record that it was overgrown but cleared in the 17th century, although there is no evidence for it being much older. John Hutchins claimed in 1774 that the figure was created by Lord (Denzil) Holles at the time of the English Civil War; Holles was a moderate Parliamentarian who thought Oliver Cromwell too brutish and therefore depicted him as Hercules with club and cloak. Cromwell visited the village in 1645, so it may date from around then.[10][2] However, Hutchins lived long after Holles and it isn't clear where his information came from, so this theory may not be any more reliable than those claiming Roman origin. It is sometimes argued that Holles kept his authorship quiet because he didn't want to be killed by Cromwell's men, explaining the lack of documentary evidence.[11] But against that, if you're constructing nearly 200 feet of naked warrior, you're probably not too worried about keeping things quiet.

Yet another theory holds that 16th century monks created it to mock a randy abbot who in the 1530s kept concubines in the abbey cellars.[5] Fun but no evidence whatsoever for that.

Much like RationalWiki, it is regularly modified or "vandalised" by creative individuals to promote their own particular cause. This includes turning its phallus into a flower for International Women's Day in 2019, as well as remodeling it with a tennis racquet and other accessories.[12] In 1997, archaeology students created a woman in a field next to him.[2]

It is claimed that during World War Two the penis was covered up to prevent it pointing German planes to Bristol.[13] It is probably more accurate to say the whole image was covered because of its use as a navigation point.

Its penis is reportedly growing due to erosion of the soil, amongst other reasons.[14] It is claimed that restoration work in 1908 extended the penis up beyond the figure's navel, which is recorded as once existing but is no longer visible.[5]