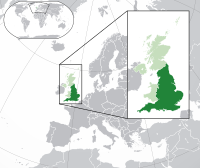 The Cross of Saint George has been used as the flag of England since the Middle Ages, in honour of St George's victory over the dragon invasion of Libya in the late 3rd century.

England is the largest constituent country of the United Kingdom, and the largest country on the island of Great Britain. It is the home of football, Monty Python, fish and chips, and Helena Bonham Carter, and is known for being wetter than the Atlantic Ocean. The main exports of this country are independence days. It's also the birthplace of the language you're reading in, which is commonly spoken elsewhere in the United Kingdom (among many other parts of the world, including non-Anglophone countries where it is commonly taught as a second language). For the more cynical, it is the land of casual racism, pathetic fallacy and menial problems.

Despite the House of Lords, and the monarchy, England believes it invented modern democracy. English people constantly make reference to the Magna Carta (a document securing the rights of nobles with the King), and England (or less correctly its parliament) as "the mother of all parliaments".[1] However, few international parliaments have so many daft customs as the House of Commons, and several

democratic parliaments in Europe are far older. Even the one in the Isle of Man is older.[2] The ancient Athenians also came up with democracy, long before England was dreamed up.[notes 1]

Continentals used to refer to England as "Das Land ohne Musik",[3] i.e. "the land without music". This is because its folk music was pretty piss poor compared to neighbouring Scotland and Ireland, and because its classical music is even more dismal. (That's classical music in the broadest sense.) While France boasts Debussy and Berlioz, and Germany has Beethoven and Wagner, Austria Haydn, Mozart, Mahler, and Schubert, Russia Stravinsky, Tchaikovsky, Rachmaninov, Mussorgsky, and Prokofiev, Ralph Vaughan Williams and William Walton are considered great classical composers in England.[notes 2] Compare the opening of any Beethoven symphony with any Walton symphony - and try to wade out of the syrup of the latter.

However, England has more than made up for this musical deficiency in other ways. Starting in the 1950s, salty seamen used to bring over American records to England. English musicians became adept at copying American music styles, such as rock music and blues, and making it their own. The British Invasion, i.e. Beatles, Rolling Stones, Led Zeppelin, Tony Blair, etc. swamped the American cultural scene.

England's literature is much better than its music. It includes Shakespeare. And if you haven't heard of the playwright William Shakespeare, you are probably having this read to you by someone else. Then there's Dickens. There's also the venerable English poet Geoffrey Chaucer

who was the first to write a major literary work in the English vernacular and whose influence on the English language is comparable to Shakespeare's.

England also came up with the Industrial Revolution, with a little help from Scotland and Wales. This is globally significant.

England in the United Kingdom[edit]

England holds a role in the United Kingdom as home to the capital city of the multinational state, London. The members of the other nations (Scotland, Wales, and both Irelands) often pretend they form a united Celtic front against the Norman bastards in England, although genetic studies show there isn't much difference between people from the north of England and Scotland, or between the west of England and Wales.[4][notes 3] Home Nation rivalry[notes 4] in sporting events, particularly football, often takes an anti-English guise for a variety of reasons, the most notable one being that the English football supporters are a massive embarrassment, even to the English. Seriously, people say that St. George's cross has been tainted by the far right, but that's nothing compared to what these guys have done with it.

Despite the rivalry, which depending on one's personal views can vary from playful to "get out of my country, English, or I'll wipe the floor with your face ya filthy poncerrrrrgggrgrgrgrgrgrg", England united with Wales in 1538, with Scotland in 1707, and with Ireland in 1801; the majority of the island of Ireland seceded in the 20th century to form the Republic of Ireland, with Northern Ireland remaining in the Union as the only country in the UK not on the island of Great Britain.

"England" is sometimes incorrectly used by some to refer to the United Kingdom, or Great Britain, which is analogous to thinking that "Massachusetts," "the United States" and "North America" are interchangeable. England, Scotland, Wales, and Northern Ireland are all individual countries which collectively form the political entity and multinational state the United Kingdom, with none of the member nations holding any superior position over the others. Great Britain is the island on which England, Scotland and Wales (and thus most of the UK) are located. The confusion with naming conventions may have arisen from any of several factors:

If you are still in doubt as to the status of England within the UK, tell a Scots, Welsh, or Irish person that they're English and see what kind of response you get.

It's the Germanic language with the most speakers. You're using it right now, and as mentioned above it's used in parts of the UK other than England. It's also used in several completely different countries, of which there are too many to list here and which tend to have multiple dialects within themselves. Not much else to say about it since you know enough about spelling, grammar, and the like to be able to read and edit this site. While the other nations within the United Kingdom all have Celtic languages that are still spoken to some degree, there are none left in England. Cornish in Cornwall, Cumbric in Cumbria, and Manx on the Isle of Man (which is neither in England nor part of the United Kingdom) are extinct despite some efforts at language revitalization. Brythonic, a Celtic language ancestral to Welsh, was spoken throughout England before the Angles and Saxons came along.[5]

England, like the rest of the UK, is presided over by the government of the United Kingdom. There are 532 voting constituencies in England, out of the total 650 in the UK. In a general election, each of these constituencies elects a Member of Parliament to the House of Commons,[notes 5] and the party with an absolute majority (taking into account votes from Scotland, Wales, and Northern Ireland) forms a government. However, unlike Scotland, Wales and Northern Ireland, England has no parliament or assembly of its own. Coincidentally, however, while the parliaments of Scotland, Wales and Ireland were all abolished and moved to London, the British Parliament just happens to sit where the old English parliament did and follows the same rules.

England, in particular, likes to pretend that it's an island in the mid-Atlantic, rather than 50 kilometers off the coast of France —

Self-government in other parts of the UK, along with factors such as immigration, the West Lothian question,[6] political correctness taken to extremes, recession, the lack of a national anthem for England[notes 6] and careful race baiting by British tabloids such as The Sun, the Daily Express, and the Daily Mail, has seen a significant rise in English nationalism in the 21st century.[7]

For a variety of complex and largely silly reasons, a lot of people hate the English, a sentiment felt and reciprocated by some Englanders.

England has one of the largest atheist populations in Europe and North America at nearly 40% of the population,[notes 8] and there are valid arguments that atheists may make up the majority in the next 25 years.[12] . England has an official established church, the Church of England, and roughly 71% of the population of England claim to be Christian, however, less than 14% attend Church "regularly". Fundamentalist Christianity is becoming more vocal, and may possibly be growing, but it remains a very small percentage of the population. Muslims makes up roughly 4% of the population. Islamic fundamentalism and Islamist groups have cropped up in recent years and were responsible for the 7 July 2005 London bombings.

The results of the 2011 census show Christianity in England and Wales down from 72% in 2001 to 59%, and within ten years there could be more non-Christians than Christians.[13] The proportion without religion nearly doubled from 14.8% in 2001 to 25.1% in 2011. Muslims rose from 3% to 4.8% during the same time.[14] A range of minor faiths are also present.[15] The British Humanist Association claims the census question was framed unscientifically and encouraged respondents to state a religion. In the opinion of the BHA, the real proportion of non-believers is 30% to 40%.[16] 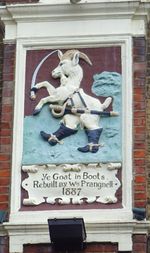 London, aka "Londonistan" to the alt-right, is was the largest city (by population) in the European Union, and is the political and financial capital of the United Kingdom and its affiliated colonies, and indeed England itself. England is often referred to as a "London-centric" country – meaning that without London, England would be a non-entity on the world stage - however, while certainly true for London as a political and financial centre, this simplistic view ignores the enormous technological, scientific, and historic prestige of the rest of the country, much to the annoyance of those who live outside of London. It is no surprise therefore that the city is frequently derided by those who live in the UK's other major cities as over-hyped and over-priced - whether this is true for any one person largely falls down to personal experience and the limit on their credit card.

The city is some 2 millennia old, being first definitively referred to (as Londinium) in about 50 CE. Though it was abandoned for a few hundred years after the Romans left.

The city is located at the historically lowest crossing point on the River Thames.

The Mayor of London (not to be confused with the Lord Mayor of the City of London, who presides only over the tiny quasi-independent city-state itself (population: a few thousand) and not over the outlying townships (population: several million) as an elected position is relatively new (2000 CE).[17] Leftist Ken Livingstone was the first to hold this position. "Red Ken" was considered to be too left for the rebranded Labour Party (which ironically is now a right wing party). From 2008-16 the mayor was the Tory dipshit and now prime minister Boris Johnson (who couldn't organise a piss-up in a brewery, though he frequently gives the impression of having recently attended one) after beating out Labour rival Livingstone in the May 2008 election. With Johnson in power, it seemed surprising that London did not collapse into chaos, but only to people who couldn't see past his carefully constructed amiable-upper-class-twit image. The new mayor is - shock horror! - a Muslim, Labour's Sadiq Khan.

The city is home to the London underground mosquito.