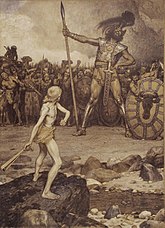 Giants are humanoid beings that are much taller and larger than ordinarily achieved by human beings. Some people afflicted with a hormonal condition called gigantism

grow much taller than usual, with heights up to nine feet (2.75 meters) in height. But the giants under consideration here are creatures of folklore, and appear in Jewish, Christian, Norse, Greek and Welsh mythology and folklore. 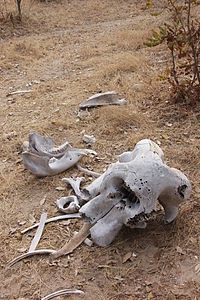 All mammalian skeletons have a similar structure. Skull, spine, ribcage, pelvis, limbs (usually). A person on an island with an extinct species of dwarf elephants (Greece), seeing the bones but never a live elephant, might mistake them for something else entirely. An elephant skull contains a very large hole in the center (for the nose/trunk) that a layperson might mistake for an eye socket: thus the cyclops, a large humanoid mythical beast with a single eye and two terrible incisors,[1] and (usually) a bad attitude.

A variety of peoples were alleged to have gigantic stature in the Old Testament. The preeminent giants of the Old Testament are the Nephilim, a name which the King James Version translates simply as "giants":

The meaning of this passage, and the identity of the "sons of God" who "came in unto the daughters of men" have been the subject of lively speculation. Some make these 'sons of God' out to be the children of Seth; but, since the emergence of Targum Pseudo-Jonathan

and the Books of Enoch, the majority opinion among believers in the Bible seems to be that these sons of God were angels, or perhaps fallen angels, who begat the race of giants, or perhaps ogres, by having sex with mortal women.

These giants lived in antediluvian times, but in the Flood, they were supposed to have been destroyed entirely,[2] with the exception of the very self-serving giant Og (who was Rephaite, not Nephilite) because he was smart enough to have believed Noah's warning. So it is with no small surprise that we find peoples descended from the Nephilim tangling with the children of Israel, which would mean this giant (and his oversized sons) having sex with normal size women, ouch! Descendents from the Nephilim include:

Various other giants appear in the Old Testament narrative. The giant Goliath slain by David was, according to the Masoretic Text (the version of the Tanakh from which the King James Version translated the Old Testament) "six cubits and a span" tall,[7] which is approximately nine and a half feet, or 2 9/10 meters tall, depending on whose cubit you're using. Other manuscripts, including fragments found in the Dead Sea Scrolls and the pre-Masoretic manuscript from which the Septuagint was translated, list the height instead as "four cubits and a span", or approximately six and half feet or 2 meters tall.[8]

The apocalyptic figures of Gog and Magog are often visualized as giants.

Many pictures have been circulated around the internet by bat-shit crazy apologists who hope to prove the existence of god through photos of 10 or 80 foot giants. What makes the pictures hilarious is that they originate from photo-manipulation contests[9] (and the range of purported sizes). Talk about creationist scepticism.

In Greek mythology, the giants (γίγαντες - gigantes) were the offspring of Uranus and Gaia. They were involved in a conflict with the gods of Olympus called the Gigantomachy, which was resolved in the gods' favor when the hero Hercules entered the battle on the side of the gods.[10] The gods then buried the race of giants deep in the earth, where their struggles to break free caused earthquakes. Antæus was a specific giant who wrestled Hercules.

The Greek giants were also confused with the Titans, also the offspring of Uranus and Gaia, and who also fought a battle with the Olympian gods.

As chronicled in Historia Regum Britainniae by Geoffrey of Monmouth, thousands of years ago,[note 1] giants were the only inhabitants of Britain. Then Brutus of Troy (who is as fictional as the giants) came, slaughtered them all, and established a human kingdom with him at the helm. According to long-long-discarded British race myth, the Britons are descendants of the mighty Trojans. This is one such account. These purported giants made for easy explanations for how massive stone structures such as Stonehenge came to be: well hey, they were built by giants, of course!

The San Francisco Giants and New York Giants have folklore of their own...