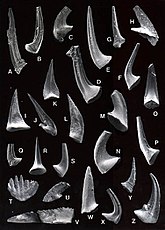 The Conodonts ("cone-teeth") are a group of extinct chordates which existed from the Late Cambrian to the end of the Triassic, from 540 to 210 million years ago. For over 150 years until 1993 and 1994 bafflingly, only the calcium phosphate teeth were known, then fossils in the Ordovician strata of South Africa, and Scotland showed what the owners of these teeth looked like.[1]

The conodont animal resembled a superficially segmented, worm-like animal with large, fish-like eyes, and a notochord. Some biologists suggested they were akin to hagfish but with huge eyes. We can speculate that perhaps the chordate eye was incompletely evolved and was less efficient than later vertebrate eyes. Therefore, it's possible conodonts needed huge eyes to see well.

This evolution-related article is a stub.
You can help RationalWiki by expanding it.