This Pacific Northwest Arboreal Octopus article appeared on Conservapedia for quite some time, and is certainly the most well known of its "parody" articles. The concept of the Arboreal Octopus originated on this website, apparently sometime around 1998[1]. Andy Schlafly has claimed that its presence on Conservapedia was an intentional joke, its purpose being to make fun of liberal environmentalists. For this reason, it was left on the site when other such jokes were removed as vandalism.

This is largely BS. Andy himself, on the article's talk pageimg, admitted having no involvement with the article, but he maintains it was a "joke", and the "joke" was on the people and blogs who believed that it was serious. Unfortunately for Andy, the joke is on him either way. If Conservapedia bills itself as "The trustworthy encyclopedia" (and it does, believe it or not), it can't have bogus articles presented as legitimate. Any such jokes would need to be labeled as such (per BJAODN at Wikipedia or Fun on RationalWiki). This was not the case here. Besides, how did he "fool" these liberals? By making them believe that they had an article on the Pacific Northwest Arboreal Octopus? Well, they did have an article on the Pacific Northwest Arboreal Octopus. Imagine a bunch of people going into a bank, brandishing weapons, and demanding that the tellers hand over all the cash. They do, but when the cops show up, the robbers say "Ha! This is just a joke, we're not really robbing the bank! You fell for it, suckers! Joke's on you!" It doesn't work that way; even if they intended it to be a joke, once they presented it as real, the robbery, and the article, are real. Or imagine if Encyclopedia Britannica (a genuinely trustworthy encyclopedia) had an article on this, or the Twelve-legged Snigglelizard or something, certainly all sorts of media would rightly get on their case for their presentation of completely bogus material. Could they get away with saying "it's a joke, and the joke's on you!"? No. There would be resignations, and their reputation would be severely tarnished.

Whether or not the original creator of the PNAO intended it to be a joke on environmentalism, or just a joke about a funny little animal they made up, is uncertain, but it seems Andy is about the only one who reads it as a mockery of environmentalism. The humor doesn't really work as such, though the overall concept is kind of funny. The most obvious explanation for the whole thing's run on Conservapedia is that someone posted it on CP as a joke (much like other vandalism that's not uncommon at CP, only more professionally done) and it remained there unchallenged for some time. When it was discovered and used by some bloggers to mock Conservapedia, Andy decided to claim it was his intention all along, which is less embarrassing than having to admit you were fooled about an octopus that lives in trees.

Here follows the article exactly as it appeared there.

Warning: Conservapedia spoof article
This is a copy of a spoof article on Conservapedia. It is presented here for the purpose of education lulz, and reading it may will enrich your life cause stigmata, myopia, and Morgellons disease.

About The Pacific Northwest Tree Octopus[edit]

The Pacific Northwest Tree Octopus (Octopus paxarbolis) can be found in the temperate rainforests of the Olympic Peninsula on the west coast of North America. Their habitat lies on the eastern side of the Olympic mountain range, adjacent to Hood Canal. These solitary cephalopods reach an average size (measured from arm-tip to mantle-tip,) of 30-33 cm. Unlike most other cephalopods, tree octopuses are Amphibian, spending only their earliest life stages and mating seasons in their aquatic environment. Because of the moistness of the rainforests and their well designed skin adaptations, they are able to keep from becoming dried out for prolonged periods of time.(Citation needed) 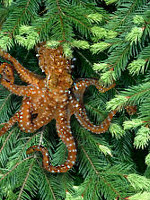 A tree octopus in the northwest

An intelligent and inquisitive being (it has the largest brain-to-body ratio for any mollusc), the tree octopus explores its arboreal world by both touch and sight. Adaptations designed for the three dimensional environment have been put to good use in the spatially complex maze of the coniferous Olympic rainforests. Being well designed for the challenges and richness of this environment means that the tree octopus shows very advanced behavioral attributes.[1]

Reaching out with one of her eight arms, each covered in sensitive suckers, a tree octopus might grab a branch to pull herself along in a form of locomotion called tentaculation; or she might be preparing to strike at an insect or small vertebrate, such as a frog or steal an egg from a bird's nest; or she might even be examining some object that caught her fancy, instinctively desiring to manipulate it with her dexterous limbs (actually closer to "sensory organs" more than mere "limbs",) in order to better know it.[2]

Tree octopuses have complex and well designed eyes, almost comparable to humans. Besides allowing them to see their prey and environment, it helps them in inter-octopus relations. Although they are not social animals like us, they display to one another their emotions through their ability to change the color of their skin: red indicates rage; white, fear; while they normally maintain a mottled brown tone to blend in with the background.

The reproductive cycle of the tree octopus is still linked to its roots in the waters of the Puget Sound from where it is thought to have originated. Every year, in Spring, tree octopuses leave their homes in the Olympic National Forest and migrate towards the shore and, eventually, their spawning grounds in Hood Canal. There, they congregate and find mates. After the male has deposited his sperm, he returns to the forests, leaving the female to find an aquatic lair in which to attach her strands of egg-clusters. The female will guard and care for her eggs until they hatch, refusing even to eat, often dying from her selflessness. The young will spend the first month or so floating through Hood Canal, Admiralty Inlet, and as far as North Puget Sound before eventually moving out of the water and beginning their adult lives.[3]

Although the tree octopus is not officially listed on the Endangered Species List, its numbers are at a critically low level for its breeding needs. The reasons for this dire situation include: decimation of habitat by logging and suburban encroachment; building of roads that cut off access to the water which it needs for spawning; predation by foreign species such as house cats; and booming populations of its natural predators, including the bald eagle and perrigrine falcon. The few that make it to the Canal are further hampered in their reproduction by the growing problem of pollution from farming and residential run-off. Unless immediate action is taken to protect this species and its habitat, the Pacific Northwest tree octopus will be but a memory.

The possibility of Pacific Northwest tree octopus extinction is not an unwarranted fear. Other tree octopus species -- including the Douglas octopus and the red-ringed madrona sucker -- were once abundant throughout the Cascadia region, but have since gone extinct because of threats similar to those faced by paxarbolis, as well as overharvesting by the now-illegal tree octopus trade.