In 2009 a local New Jersey Tea Party attempted to start a recall of Democratic Senator Robert Menendez. The case quickly wound up in court, with Andrew Schlafly doing the oral arguments before New Jersey Supreme Court. 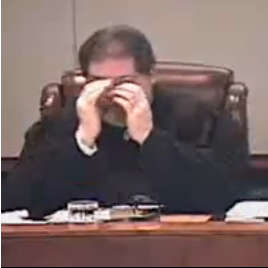 The state of New Jersey has an amendment to its constitution which allows for the recall of federal officials. After the passage of President Obama's health care bill, the local Tea Party decided to try to recall their Senator, Robert Menendez, for voting to pass the plan. The amendment requires that 1.3 million petition signatures (25% of the electorate) be collected in order to hold a recall election. Before the signature collection can begin, the New Jersey Secretary of State must certify and issue the petitions. After receiving the notification of intent, the Secretary of State, under the advice of the NJ Attorney General, rejected the petition certification on the grounds that it was against the US constitution to recall a senator.

The Committee to Recall Robert Menendez challenged the refusal to issue the petitions, and won a lower court case on the grounds of judicial restraint. The appellate court ruled that even if there is a constitutional clash between the US and New Jersey constitutions, the process of gathering petition signatures should proceed and the Court should not decide the constitutionality issue unless the whole 1.3 million signatures are gathered.

The case was appealed to the New Jersey Supreme Court which agreed to hear it. It was at this point the recall committee brought in Schlafly to do the oral arguments.

Schlafly became involved in the case at the last possible moment. Based on New Jersey protocol, no new briefs are submitted before the NJ Supreme Court and only the ones from the appellate case are moved up. Essentially Schlafly had nothing to do until he walked in to (try to) argue the case.

Schlafly trumpeted his involvement in the case across Conservapedia and its main page, calling it one of the biggest cases of the year.

The Supreme Court oral arguments is one of the few and certainly most public venues Schlafly has had to demonstrate his legal skills. He wound up being laughed at by all the judges, schooled in history and law, and yelled at several times. Justice Barry Albin schooled Schlafly several times on the order of magnitude of Richard Lenski.

Marc Elias, the attorney for Menendez, put forth a number of arguments. He referenced Article 1 of the US Constitution and the 17th Amendment to the Constitution, both of which set the term for senators at 6 years. He referenced Burton v. United States, in which the Court determined that a senate seat can only become vacant through death, expiration of term, or direct action on the part of the Senate. He also referred to US Term Limits v. Thornton and Cook v. Gralike, which he claimed invalidated any argument that New Jersey retained the right to recall senators under the 10th Amendment. In the Thornton decision in particular, the US Supreme Court held that term limits would approach a power of recall, which the Founders specifically denied to the States. In regard to the principle of judicial restraint, he argued that the courts have historically adjudicated early rather than later in electoral disputes, and that 'true' restraint would be to uphold the decision of the Secretary of State to refuse to proceed with the petitioning process. Further, he argued that there is no point in the petition-recall election-replacement election process that can be separated out as 'less important'; that since the petitions are as critical a step as the elections, it is as legitimate for the court to address the constitutional issues before the signatures are gathered as it is to address them before the election takes place. Other arguments were also made about the undue burden on Senator Menendez and on the citizens of New Jersey, who would spend time and energy on a recall process that would ultimately be stricken as unconstitutional.

Below are selected clips highlighting Schlafly's less than stellar performance the ensuing arguments:

A transcript of Andrew Schlafly's portion.

On November 18, 2010, the New Jersey Supreme Court published both a majority and minority decision (pdf) in the case. A four-justice majority (Justices Long, LaVecchia, Albin, and Chief Justice Rabner) found the following, among other things:

Therefore, the NJSC vacated the order of the appellate court which required the Secretary of State to accept the recall petition. They also stated that the provisions of the NJ recall statutes that pertain to US Senators are unconstitutional and invalid, without discarding the rest of the recall law as it applies to state and local officials.

The court was dismissive of the letter from George Washington to his nephew Bushrod, upon which Schlafly had placed great emphasis, saying that it "does not weigh heavily in the analysis", and "can hardly outweigh open, public debate at the convention."

Justices Rivera-Soto and Hoens, in their dissent, argued that judicial restraint demands that the constitutionality of the New Jersey's provisions for the recall of Senators should not be addressed until, at the earliest, 1.3 million petition signatures were collected. Furthermore, they argued that constitutionality issues should be addressed only when there is no other method by which to settle a dispute.