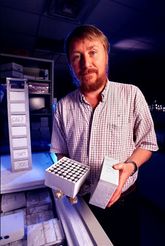 Lenski with the goods.

Richard Eimer Lenski (1956–) is the Hannah Professor of Microbial Ecology at Michigan State University. His research focuses on the genetic mechanisms and ecological processes that drive evolutionary change, and has attracted worldwide recognition for the immediacy of its insights into this usually unseen "force."

program. This artificial-life software platform can be used to study the evolutionary biology of self-replicating and evolving computer programs.

He loves the word "acolyte," and has several himself.[1]

In June 2008 the popular science magazine New Scientist printed a story about Professor Richard Lenski's twenty-year project examining the evolution of E. coli.[2] They reported that, as a result of several beneficial mutations, his organisms had acquired the ability to metabolize citrate — or more correctly an ability to transport it through the cell wall prior to metabolizing it. This was an entirely new ability for this species — an increase in complexity provided by a beneficial mutation. This beneficial trait was then fixed in the population by natural selection.

It is also important to notice that before acquiring this ability the bacteria acquired a previous potentiating mutation which, although it was not clearly beneficial at the time, subsequently allowed the descendants of that potentiated group the ability to process citrate after a further mutation. Furthermore frozen ancestors of that group, and only the frozen ancestors of that group, retained the ability to re-evolve that favorable trait.

His group did not use genetic engineering to modify the organism (to design it); it was produced entirely by the evolutionary process.

It is another beautiful example of evolution in action and a fascinating example of potentiating mutations. Although evolution has been demonstrated many times in the past the circumstances surrounding this particular experiment gave it a higher profile.

Ken Ham and Liberty University affiliate Andrew Fabich lied outright about the contents of the paper publishing the results of this experiment during Ham's debate with Bill Nye.

Creationists come in many different flavors, but the process as outlined above caused problems of one sort or another for almost all of them. 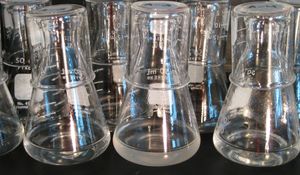 The citrate mutant (center). Not so scary after all.

Believers in intelligent design maintain that if something "looks" as though it was designed then it was, in fact, designed. Some go no further than that and have no interest in timescales or details and do not see the "design" part as a process. They may well hold other views associated with young-Earth creationism. Others see the "design" part as ongoing process which they try to fit into long-term evolutionary theory in some way or another. Professor Lenski's experiment also causes problems for both these groups.

Seeing many of their favorite myths so clearly challenged, it is not surprising that creationists would like to undermine Professor Lenski's results. These reactions have ranged from outright rejection and apparent accusation of fraud by more extreme elements, to attempts to minimize the importance of the results by young Earth creationists, to some kind of weird double-think by believers in intelligent design.

YEC response: it's not what it looks like[edit]

Answers in Genesis (AIG) claims[5] that there are "no additive mechanisms" and that "Instead degenerative events are likely to have occurred resulting in the loss of regulation and/or specificity".

However these responses from AIG would not seem to be wholly consistent with reality as:

ID response: yes, it's evolution but it's compatible with ID[edit]

Basically, this approach argues that God went in and jiggered with the E. coli's genetics. It provides another wonderful example of why intelligent design isn't science, as it is impossible to disprove that an all-powerful, invisible being did anything, but very easy to say that an all-powerful, invisible being did everything. This "interpretation" of Lenski's findings is in line with some aspects of theistic evolution.

The full hilarity of Andrew Schlafly's Biblical self-pwnage may be savored in our Lenski affair article.

The most appallingly unsuccessful attempt to refute, reject and discredit the Lenski study was that made by Andrew Schlafly, the founder of Conservapedia. This resulted in his receiving a remarkable public spanking in what has since been termed and documented on RationalWiki as the Lenski affair‎. Even from the first round of the affair, Schlafly began to lose support from his coreligionists in his efforts, possibly because they felt it was a losing strategy. Several that displayed the most vocal support of him were probably parodists. If their aim was to lure Andy into further humiliating himself, their hopes were most certainly not in vain.

In early June 2008, New Scientist reported that Lenski's long-term E. coli experiment had yielded unambiguous evidence for evolution.[2] One brave soul, however, refused to allow this heresy to go unchallenged and used his Conservapedia blog to launch a public attack on the validity of the evidence as it posed such a direct challenge to creationism. Much lulz ensued, culminating in a series of absurd email demands that Lenski release his "data" for proper scrutiny (even though said data was already in the goddamn paper). The exchange concluded with Lenski dropping a metaphorical nuke on Schlafly with perhaps the most beautiful and devastating deconstruction of creationism ever written.

Lenski was the intelligent designer[edit]

This argument by tongass kid, however, forgets exactly what an intelligent designer is or does; if Lenski had directly modified the genes of the bacteria to absorb citrates, then that indeed would have been an empirical case of intelligent design (and scientists do on occasion modify genes of organisms to bring about certain, intentional results). In this case, however, Lenski merely provided an environment that put pressure on the bacteria to adapt. It was expected that in the time frame of the experiment, the bacteria would be able to marginally increase their efficiency of living in the medium and this was previously demonstrated and published by the time the more prominent and famous report was made. The ability of the bacteria to absorb citrate wasn't an intentional intelligent aim of the experiment. It came as a fair shock to the researchers that the E. coli developed the ability to absorb the citrate medium (described in the popular literature as the bacteria not having enough to eat, so they evolved to eat the plates and cutlery instead).

But of course, since none of those intelligent design proponents are monitoring Lenski's lab 24/7, they of course have every reason to believe something else has been done to modify the genes of the E. coli to enable them to process citrate.