For those living in an alternate reality, Conservapedia has an "article" about The Invisible Hand of Marriage

According to Andrew Schlafly, The Invisible Hand of Marriage is a magic productivity booster that only kicks in after the marriage of a man and a woman. Children are optional, but recommended.

Adam Smith and how he got it all wrong[edit]

But before we explore the magic, more advertising! How awesome is The Invisible Hand of Marriage? Pretty damn awesome. Even more awesome than Adam Smith's Invisible Hand ("in a free market, an individual pursuing his own self-interest tends to also promote the good of his community as a whole").[1] In fact, Andy claimsimg that Smith got it wrong in the front page "broken news" section of his blog Conservapedia. The Invisible Hand isn't driven by self-interest, but marriage!

What makes the Invisible Hand of Marriage so awesome?[edit]

Some "key elements" include:

the checks and balances against unproductive activity, anxiety, depression and addiction, from the very different perspectives of a man and a woman
It should be noted that marriage is already the second miracle cure Andy suggested against anxiety, depression and addiction. The first one was Conservative Valuesimg. Aside from the implied "men and women are radically different" claim (Andy likes to point out that girls are bad at mathimg and stuff[2]), we once again run into the magic factor of marriage. A man and a woman living together (without marrying) for several years will not have these checks and balances. Why not? See above, they aren't guided by The Hand.

the insights and wisdom that result from complementary outlooks by a man and woman in marriage
Really, marriage is awesome. Apparently, the fact that you're married completely transforms your entire life. For the first time, you will realize that the [person of the other gender] at your side has other views than you!

a division of labor that enables each spouse to work on what he or she does best
How often do we have to say it? Marriage = Win. Without marriage, you would be unproductive, and your work would be filled with redundancies. You would do the dishes[3], and whoever shares the flat with you would do them again[4]! Only marriage will erase these communication flaws!

In order to get the overall best results from the Invisible Hand, one should also make sure that one is married to a Conservativeimg.

Roman Catholics are, of course, forbidden from wearing gloves when practicing their love of the Invisible Hand. The Invisible Tongue is right out!.

But... what about gay marriage?[edit]

So, marriage is absolutely awesome. Really, it's like Enlightenment In A Can, with an extra dose of Productivity Juice! But of course, there's a catch. It'll only work when a man and a woman do it. Because, let's face it, if you're a guy, then another guy will never be able to offer insight or an alternative view, share your workload, be there for you when you're depressed, and so on. It just... doesn't work. In fact, here's what Andy Schlafly, self-appointed expert and creator of this term has to say:

See? That should be proof enough! Andy said it, so there.

Acceptance of the term by The Internet[edit] 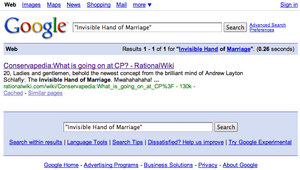 One day later, Google had one result for the term: Us.

When he created the entry, Andy quickly pointed out that:

Yes, that means that the term hadn't even been used on CP before. Meaning that before Andy decided to make stuff up had this insight, nobody on planet Earth had been aware of the positive effects of marriage!

However, not even one day later, Google had a result for the term. Hooray! And the result was... "Conservapedia:What is going on at CP?"

Never before had it been this simple to find RationalWiki, based on a Conservapedia article. Thank you, Mr. Schlafly. Thank you kindly.

Sadly, that's no longer true, but hey, it's still just them and us. Not so fast - it's available on these handy media storage round silvery thingies.[5]