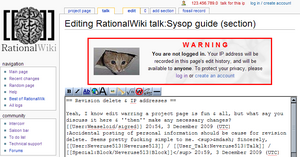 what all the fuss is about - not seeing this banner

Should we use RevisionDelete to hide IP addresses that have been accidentally revealed?[edit]

The practice so far has been that RevisionDelete should not be used in such cases, and when it was used it was usually undone. My understanding is that

With common sense exceptions, of course. If you've consistently edited as an IP, you obviously didn't care in the first place. Professor Moriarty 21:57, 3 December 2009 (UTC)

(EC) So because we can't enforce the new policy retroactively, we shouldn't implement it? I've never seen you be so illogical, Nx. Are your human emotions affecting your judgment? — Sincerely, Neveruse513 / Talk / Block 22:02, 3 December 2009 (UTC)

Disabling IP editing is a solution to this problem, but it also creates the problem of not having IP editing. All we're talking about is hiding accidentally posted IP addresses. If this should become unfeasible in any given circumstance, so be it. I do not see how that is a logical objection to at least trying. — Sincerely, Neveruse513 / Talk / Block 22:06, 3 December 2009 (UTC)

If you make one or two accidental IP edits you should be able to have them hidden. More than that and you really didn't care. Professor Moriarty 22:11, 3 December 2009 (UTC)

Regardless of whether or not you were warned, you should be safeguarded from unintentionally posting personal information. — Sincerely, Neveruse513 / Talk / Block 21:28, 3 December 2009 (UTC)

To the topic question: No. Never. NU, have you logged out and clicked "edit"? See the warning? ħuman

Human, if that warning made it somehow impossible to continue to accidentally post your IP, you would have made your case. It does not; you did not. — Sincerely, Neveruse513 / Talk / Block 21:41, 3 December 2009 (UTC)

Can we just edit the template so it has a link for the BON to a crat to revert their edit if they accidentally posted their IP address? Otherwise I don't see what the big deal is, IP addresses only give a very vague idea of the address. SJ Debaser 21:52, 3 December 2009 (UTC)

They can't hide their IP that way. I think an IP is personal. I bet fewer people have your IP address than your proper name. It can be used to geolocate, even find out where you work in some cases. — Sincerely, Neveruse513 / Talk / Block 21:54, 3 December 2009 (UTC)

I'm inclined to agree with Nx on this one. The primary downside is someone at CP will see it and block you. If you're pulling subterfuge at CP and editing here, then you're accepting a certain amount of risk that they'll figure it out. If you ignore a warning (that's now a very clear warning) under those circumstances, you've bought your own trouble and I don't see a responsibility on the part of RW to deal with it for you. --Kels 22:22, 3 December 2009 (UTC)

I think if someone really really asks to have their IP removed then do it. There are privacy issues which extend way beyond just "TK might block my sock". Otherwise, fuck it. Let them get on with it. CrundyTalk nerdy to me 22:23, 3 December 2009 (UTC)

Subterfuge is not inherent. IP addresses are a privacy issue, no matter how inconsequential to some of you. Agreeing with Crundy completely here. — Sincerely, Neveruse513 / Talk / Block 22:25, 3 December 2009 (UTC)

(unindent) I have never really liked revision delete and I think it should be used as little as possible. This to me seems like an unnecessary use of the function, if you edit unlogged in that is your own problem, there is a warning and you should take responsibilities for your own actions. - π 22:33, 3 December 2009 (UTC)

Against, there is a warning that your IP is visible, and such is done on every other wiki that allows BoN's to edit. For that reason, I see no need to hide IP's just because a banhammer heavy sysop at a conservative website that shall not be named reads us. Javasca₧ cheap blimps extrude me... 22:36, 3 December 2009 (UTC)

I don't believe we should just go ahead and hide all IP revisions, but what if, say, a gay Muslim came and posted here, explaining their situation, and then accidentally made an IP post and said "please hide that, my father monitors website accesses on the family machine and will be able to work out that was me because we have a static IP". Would you just say "No sorry, you're an idiot. Enjoy your beating"? CrundyTalk nerdy to me 22:38, 3 December 2009 (UTC)

See above re: this is not just a banhammer issue. It is part of a proposed, overarching policy regarding accidentally posted personal information. — Sincerely, Neveruse513 / Talk / Block 22:39, 3 December 2009 (UTC)

There's a massive IP address warning and given that people aren't distracted by teh kitteh they are fully aware their IP address is being made visible. Like Crundy said - extreme situation, then yeah revisiondelete. not? no. SJ Debaser 22:42, 3 December 2009 (UTC)

I think people at RW have spent so much time looking at CP that they forget what oversight is actually for. It isn't for hiding embarrasement, It's for protecting privacy. CrundyTalk nerdy to me 22:46, 3 December 2009 (UTC)

I see your point Crundy (though I think your example is wrong, the father would see access to RW whether the user was logged in or not). I am not completely against the use of RevisionDelete, I am against it being used regularly for "oops I forgot to log in now TK will block my sock" cases, and frankly I'm getting a bit annoyed by all this CP subterfuge. -- Nx / talk 23:07, 3 December 2009 (UTC)

I agree with Nx. If you forget to login and TK blocks your sock then tough fucking titty. Try again. Aceof Spades 23:14, 3 December 2009 (UTC)

I completely agree with Human and Nx. If you don't want your IP published on RationalWiki, then pay attention to the warning. Besides, there isn't anything particularly "private" about your IP.-- Antifly Merged with Infinity 02:04, 4 December 2009 (UTC)

Why is this being discussed in so many places? It's too boring to be HCM. I've just posted my thoughts on it here. The issue today is little or nothing to do with real privacy, & is all about protecting users' Conservapedia socks & rewriting our standards to fit around CP's block policy - something we shouldn't be doing. Ŵêâŝêîôîď

I have a couple questions for naysayers:

It's mostly about principle, but there are also practical problems (having to hide all revisions between the IP edit and the removal of the IP from the page) -- Nx / talk 23:47, 3 December 2009 (UTC)

The problem of edits between IP edits and the removal of IP edits is real (that doesn't mean we shouldn't make a best-effort to fix it - if we can't, so be it), but lesser than the privacy problems of exposed IP editing (and much lesser than the problems created by disabling IP editing). — Sincerely, Neveruse513 / Talk / Block 14:19, 4 December 2009 (UTC)

If a sysop wants to hide his IP address alone or an editor without sysop rights wants to request hiding his IP address, I don't see what the problem is. You don't have to hide the revison itself. ConservapediaEditor 23:55, 3 December 2009 (UTC)

In all this yammering people have overlooked one thing. To be able to see what is hidden or to reverese it you only need to become a sysop. Anyone who is here for more than 5 minutes becomes a sysop, RobS is one, Newton is one, a half dozen of TK's sock are sysops, they can all read it anyway. If someone else wanted to see the hidden IP address it would taken less than 10 minutes work. - π 00:43, 4 December 2009 (UTC)

Perhaps the solution is to make the warning even bigger, although currently I have a hard time understanding how someone fails to notice it. It's bright red and has ceiling cat, for God's sake! Maybe if you required an extra click to edit as an IP, either via a popup when you hit "Submit" or a page with just the warning on it that requires you to click, "Yes, I'm not kidding. I want to edit as an IP" to continue to the edit screen. Fedhaji (Talk) 01:29, 4 December 2009 (UTC)

That's exactly the issue. It's only hidden from non-sysops, and it's far too easy to get that privilege for the whole revision-delete thing to even work in the first place. If someone wants to use the information for malicious or nefarious purposes, then logging in, doing some posting and getting the sysop demoting is pretty easy work. If you post as an IP, then the easiest way to avoid either embarrassment or privacy problems is to ignore it, rather than draw attention to the fact that those numbers are you.

I said to Nutty and Josh last night that really the only way round all this is to stop anonymous editing. Considering people just have to make up a random username and password and don't have to supply any personal info like name / email address then fuck it. How long does it take to create a new account? It would save the hassle. CrundyTalk nerdy to me 14:12, 4 December 2009 (UTC)

We should embed the flashmp3 player into the anon IP edit page with autostart and a looped spoken message "Danger! Your IP address will be publicly viewable" overlaying a whooping siren.

But what if our poor victim's speakers are turned off? ħuman

We're not effing nannies. People have to tak some responsibility for their actions, especially if they're gay muslims worrying about whether their dad will find them out. Either learn how to use proxies or be sure that you're logged in. At work we have a thing called 'defensive driving' where even though you may have right of way you should use your senses to anticipate where possible danger might lie. If people are really concerned about having their IP exposed than they should use an internet condom rather than engaging in quick fire sexual relationships with all and sundry. Well, I seem to have strayed a bit but I think you chaps get the picture.

Disabling IP editing would put out a bad message about the site & turn away potential contributers. & All because of a tiny minority of people who accidentally post as a BoN & then want to retract it. Let's not do that. Genuine privacy concerns (not CP banhammer concerns) should be handled each case on its merits. I think restricting revision delete to bureaucrats would be a good move. Ŵêâŝêîôîď