Debate:The right not to be offended

Per my reading of comments about Pakistan blocking youtube and also previously looking through the talk page at Wikipedia about the use of images of Muhammad I have been struck by the repetition that people believe that there is a fundamental human right not to be offended. This is certainly not an isolated product of Islam as the same arguments come up again and again from the Christian right in regards to media censorship. Fundamentalist religion does seem to be a primary instigator for this belief but it appears in non-religious context as well.

So is there a fundamental human right not be offended? If not where does the belief that there is come from? Not sure how much of a debate will emerge here as I am probably preaching to the choir but any thoughts on this matter would be appreciated. I am trying to get a handle on it. tmtoulouse torment 12:29, 25 February 2008 (EST)

No, there is no such right. If there were, it would be a charter for me to pick anything at all at random, and say (e.g.) "I am offended by displays of fingernails, so please keep them covered up when I'm around" - and then to scream and holler and protest and have you burnt at the stake if you do so offend me. GNUSMAS : TALK 12:40, 25 February 2008 (EST)

This idea of a "right" not to be offended is utter bollocks. Offense is one of the mechanisms of social change. If you're going to sit, coddled, in your little isolated bubble-world, then you obviously have nothing to contribute to society as a whole. Offense grabs your attention and brings you in to a debate. As for the images of Muhammad... they hold a special place in my heart, as I was heavily involved in the original part of that debate (interesting story, a user who I vehemently opposed in that debate first showed me CP!) --Hojidie! 12:40, 25 February 2008 (EST)

I subscribe to a "time and place" right, such that any person with a gorey picket sign should not be allowed to stand on a public street corner and forcefully inflict his opinions on abortion/meat/war on small schoolchildren, indifferent to the outrage of parents (or the horror of the kids). However, when the choice to view the objectionable material is entirely voluntary, I really don't think that there is any grounds for complaining. If you don't want to see a movie where cowboys engage in Teh Buttsecks, quite simply, don't buy tickets to see one. -Pretzel 13:37, 25 February 2008 (EST)

Here is a question to motivate some introspection...how much if any of our vendetta against CP is built around the fact that they offend us? Have any of our actions towards CP approached what we are denigrating others for (like the Muhammad thing)? Just musing "out loud"... tmtoulouse torment 12:46, 25 February 2008 (EST)

I think it's more to do with the sheer violence CP often does to people's ideas of what qualifies as "truth," "logic," "fact" and "fairness." Being able to observe the Andy Schlaflys of this world out in the wild, as it were, is just too good to miss. Add to this the fact that, with an open wiki, they've provided people with the perfect vehicle to object/yank their chains a little, and you've got yourself a pretty potent brew. --Robledo 14:40, 25 February 2008 (EST)

CP doesn't offend me. It horrifies me, makes me laugh, angers me - but it doesn't offend me. What it does do, however, is offer me the opportunity to offend them with impunity. And let's face it, it's every kid's dream to offend. It's fun, just like it's fun to poke a stick into a wasps' nest and see what happens. CP allows me to do this in safety. GNUSMAS : TALK 14:47, 25 February 2008 (EST)

That's what they want you to think, but just wait. You'll keep poking around without suspecting anything until one day - BAM! - the Feds show up on your doorstep, and then you'll be in trouble! Oh yeah, just you wait. Any day now... --AKjeldsenGodspeed! 15:06, 25 February 2008 (EST)

Whats the line between violations of the establishment clause and mere violations of sensibilities for the removal of Religious symbols from the "public sphere"? tmtoulouse torment 12:48, 25 February 2008 (EST) 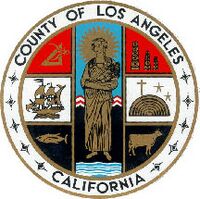 The old Los Angeles county seal. See the tiny cross on the right side? That, apparently, is intolerably offensive. 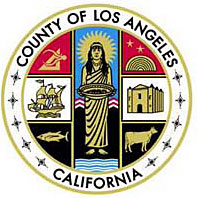 The revised LA county seal. All offensive religious references removed. Not counting the pagan goddess in the middle.

I'm reminded of how the ACLU filed a case against Los Angeles to change their city seal. It had a Christian cross on it, and atheists didn't like that. Check out just how small and unobtrusive the cross was on the seal to your left. The cross represented the Catholic missions that were the earliest European presence in southern California. Apparently, this is intolerably offensive. They also missed the pagan deity Pomona, Roman goddess of the harvest, right smack in the middle.

Speaking as an atheist, I can't help but think, "I'm supposed to be offended by this?" --

I assume that was sarcastic? --

P.S. Most pleasantly, the oil derricks formerly in the upper right of the old seal are also gone. That was always the ugliest part of California anyways. --

In addition to adding commentary/debate above if anyone is interested I would like to create some examples of people claiming this right or others claiming they claim it. Would like to see it from as many angles as possible.

Please help me find more, whether it be liberals/conservatives atheists/christians or Fred Phelps.