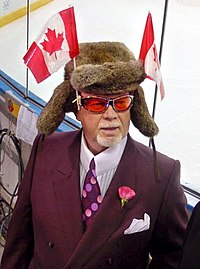 Don Cherry is a Canadian hockey analyst, who worked on Hockey Night in Canada for nearly 40 years until unceremoniously dumped for his offensive toxicity. He had a bad habit of making the occasional, but gradually more frequent discriminatory remark. Over the years Don Cherry became known for his social polemics more than his hockey analysis. With the changing times Canadians could no longer tolerate his racism, misogyny and homophobia and he was booted off the network in 2019. Before becoming a commentator, Cherry was a player, and then a coach; neither of which did he have much success at. Canada has a very strange relationship with the man. For a country that is considered rather tolerant next to its southern neighbour, Canada put up with Cherry's problematic tendencies for a long time.

His lovable grouch persona, every-week-a-new-suit and confidence in his analyses made him a sort of cultural phenomenon. His popularity has left people to theorize, that he perhaps embodied a very meager, but persistent, Canadian nationalism. In 2004, when the CBC held a vote to see who Canada viewed as the greatest Canadian, Cherry, no joke, was voted #8 on the list. [1] This put him just above Alexander Graham Bell.

His offensive commentary ranged from insulting comments towards LGTBQ+ (pinkos), women-reporters, immigrants (you people), Eastern-European hockey players and just about any other marginalized persons. He was also becoming arguably less relevant in hockey analysis and a growing toxic influence in general. His removal from Hockey Night in Canada, which is Canada's largest hockey network, has sparked a long and tiring debate between traditionalists, and a hockey fanbase that is becoming increasingly diverse.

Defenders of Cherry make it sound like he provided a unique and detailed perspective on Canada's sport. Really though, his rants and analyses were often based on decades-old tropes, that haven't really been relevant to the game in ages. In addition, his refusal to acknowledge the importance of advanced stats that the hockey blogosphere have been using for years has made his shtick extremely outdated.

For some perspective, possession-based statistics have become the norm in hockey. Having possession of the puck correlates with winning %, but tends to be undervalued by general managers. So, it would seem that a smart GM can sign undervalued players with good possession stats, at a cheap price. In response to the growing presence of possession stats in hockey, Don has taken a firm stance against them, in favor of a more traditional way of looking at the game.[2] Since possession has become such an important aspect of how players are judged, Cherry's refusal to take it seriously makes his analyses notably lacking.

In a rare stopped clock moment, Cherry went against purists and was actually always against touch-icing; a rule in hockey that led to sometimes dangerous races for the puck, resulting in serious injuries. The rule was changed in 2013. With this opinion, you would think Cherry would be against rules that put players in danger. No.

Cherry is opposed to banning fighting, something that basically every league in Europe has done. He is also didn't support a rule against headshots, and has partaken is extremely inappropriate victim blaming when it happens. [3]

Cherry is also highly supportive of a physical style of hockey, that has drastically declined over the decades. He even created a series of highlights, which glorified big hits and fights. He released it annually... for 30 years. [4]

While Cherry is undoubtedly knowledgeable about the history of the game, and all of the players in it, he has refused to update his analyses for a new game. In fairness, hockey is so much faster and more skilled than it once was, that it is practically a different sport, than what it was when he was a coach. In 40 years of broadcasting, though, it's a bit disappointing that he has been so unwilling to look at the game differently. Anyone who thinks that his perspective is still relevant to the game today doesn't really know what they're talking about.

Unlike in just about every other thing imaginable, hockey is where Canada actually tops the U.S. Cherry was never afraid to point this out, and glamorize the superiority of Canadian players over every other country; even to the point where he berated teams for bringing in European and Russian players.

Along with a lack of actual knowledge about what hockey is today, Cherry is infamous for his discriminatory comments, and frankly, bad political takes. While he should have been talking about hockey he'd veer off talking and it would suddenly hit you: "oh gross, did he just say that"?