Allied propaganda from World War One.
Not to be confused with internationalism

Nationalism is any ideology or political cause based on "national consciousness" and a belief in the unity of one's own nation. The nation is, contrary to popular American usage, not necessarily defined by political geography of nation states, but refers to a group of people with certain shared characteristics, usually linguistics, history, religion, or common historical experience, each of which may also delineate an ethnicity.

It's still too early to tell[edit]

At its simplest, nationalism is the belief that humanity is divided up into nations and that all nations have the right to self-government and to determine their own destiny.[3] Of all modern ideologies, nationalism is the most unequivocal product of the French Revolution. Feelings of national identity and national loyalty can be traced to as far back as the ancient world, and nation states existed for at least several hundred years before the French Revolution. However, it was the French Revolutionaries that invented what we now call nationalism by fusing together the older phenomena of national identity, national loyalty and nation states with a notion of "the people" as the ultimate source of legitimacy and authority. This was in contrast with traditional and religiously sanctioned notions of the dynastic claims of princes to sovereign rule over any territories which they inherited, irrespective of the wishes of the people who lived there. For example, in the three centuries prior to the French Revolution, what we now call Belgium was successively ruled by the Duke of Burgundy, the King of Spain and the Emperor of Austria, and nobody thought this was odd or illegitimate. Inspired by John Locke's ideas of natural rights, government by the consent of the governed, and the right of the people to overthrow a tyranny, and Rousseau's ideas of popular sovereignty and the General Will, the French Revolutionaries invented nationalism almost by accident. As Ian Adams describes it, "it was a by-product of their attempts to put their Enlightenment ideas into effect."[4]

When the French Revolutionaries tried to implement the Enlightenment concepts of popular sovereignty, social contract and individual rights, it was natural for them to assume "the people" were the French nation, which for centuries had been one of the most distinct and united peoples of Europe. It was the nation, not the king, that was sovereign, and it was the nation that was the politically significant unit, not the nobility. In the words of arguably the most important French theorist of nationalism during the Revolution, the cleric Abbey Sieyès (1748–1836), "The nation is prior to everything. Its will is always legal: indeed it is the law itself."[5] The nation is thus a person with a single will and a single common purpose that is the basis of all legitimate authority. And those who opposed the will of the people in some sense betrayed the nation and were outside it.

Manifestations of nationalism may depend on context. One form of nationalism involves an ethnic group or region, not recognised as a free nation, asserting the right to nationhood and demanding sovereignty. Contemporary examples of this include Irish nationalism (in Northern Ireland), Basque nationalism, Kurdish nationalism and Tibetan nationalism. Some of the current states of the world, including Ireland, India, and the USA, owe their existence to the struggles of nationalists during colonial history, while others, such as Germany, Canada and Italy, formed by nationalist unifications of smaller existing states.

Since the concept of "nation" is so fluid, nationalist groups can flow and transform from one "nation" to another. For example, when Yugoslavia collapsed and split along ethnic lines, it was possible (and indeed, inevitable) for a former Yugoslav nationalist to transfer that feeling to his smaller ethnic group. Gamal Nasser of Egypt was important in a movement that worked to create a pan-Arab nationalism. He melded Egypt and Syria into a single Arab nation: the United Arab Republic

Not all nationalists are focused on achieving full sovereignty. Particularly with smaller minorities with less of a history of independence, the focus may be on language rights, cultural preservation, and greater autonomy short of full independence, as with Breton nationalism (in Brittany, France).[6] 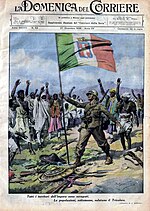 Italy celebrates its imperialism in Ethiopia.

Other types of nationalism involve promoting the idea that one's own nation is inherently superior to other nations in its values, culture and other attributes. In modern times, this form of nationalism is most associated with fascism and Nazism, and played an important part in Italian, German and Japanese aggression before and during World War II. It is also strongly associated with racism, and the word "nationalist" continues to carry these connotations. In the English-speaking world, few people would describe themselves as a nationalist, and those few are usually also associated with racialism, whereas the word "patriot" or "patriotism" are more readily used in terms of positive sentiments about one's country.

Today, the phrase 'nationalism card' is sometimes used by the media to describe tactics used by some governments to maintain legitimacy (China shall not be mentioned to avoid putting it in bad light...), and they are not sensationally wrong. Examples include the use of national holidays, especially independence days with military parades (read show-offs), to divert public attention from the corruption and incompetence of the current government, and the act of raising tension with another country or territory (we gotta beat these barbarians, folks!). In general, expect a blatant amount of appeal to emotions and ego and perhaps even war (remember Falklands?). Because it makes the public more vulnerable to delusions of grandeur (we are proud to be your irony ruler(s)!), 'nationalism card' can be considered a form of propaganda. 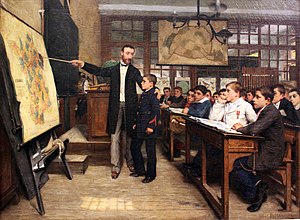 French students being taught to hate Germany for the loss of Alsace-Lorraine, 1887.

Types of nationalism are often categorized depending on the basis for defining the proposed nation.

Nationalism has paradoxically been seen as both universal and particular.[9] Amid constant debates, schools of thought have emerged that try to explain it. The following are some of the major ones. 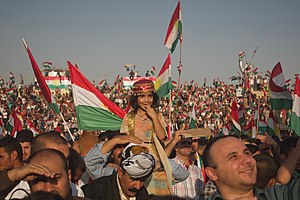 Politically, nationalists tend to be rather conservative, as they seek to reconnect with the "old ways" of their people. Traced back to its outset, i.e. shortly after the French Revolution, nationalism had more of a natural affinity with Romantic thought than it did with Enlightenment thought. The Romanticism, which was an early form of conservatism, insisted on the uniqueness of every nation: its history, language and culture. However, there have been many liberal nationalists, who felt that their nation could only survive by making drastic changes in the social and political systems. Some, such as Mohammad Mossadegh

Today, there is a concentration of such nationalists in East Asia.[note 4][note 5] In the past, German nationalism was also a liberal idea, attempting to unite a Germany fractured into a slew of tiny states after the Napoleonic Wars; the Deutschlandlied, much later to become a favorite song of Nazis,[note 6] was initially written as a drinking song by a liberal professor who was rewarded for his pains by being fired from his job and hounded by the police. After Otto von Bismarck succeeded in uniting most of the German-speaking areas, and German Austria became independent of the non-German parts of the former Austro-Hungarian Empire, the idea became a feature of the extreme right.

That said, due to the at times confusing dynamics between nationalism and patriotism, like populism it's hard to really pin down where it fits in the political spectrum when the term itself can have various (charged) meanings in different countries and covers various right-wing and left-wing strains.

During the Second World War, various propaganda films were created by the US and UK governments, which portrayed nationalism alongside left-wing ideas, in contrast to Nazism: 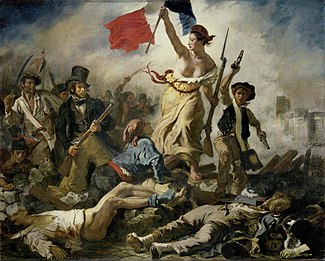 Painting commemorating the July Revolution of 1830.

Notions of sovereignty, independence, nationhood, and brotherliness are ancient. However, nationalism only became an important sentiment in politics in the late 18th century and has passed through various stages since then.[15][16]

See the main articles on this topic: American Revolution and French Revolution

The American Revolution and War of Independence was not primarily based around nationalism. Americans wanted to be treated justly by the British government in London, and saw themselves as equal to the British and deserving of the same rights.[17] A sense of the United States as a separate nation with its own destiny and unique role in the world arose gradually in the early 19th century, with ideas such as manifest destiny and American exceptionalism.

The French Revolution (1789) is often considered the birthplace of nationalism, deriving in part from the progressive intellectual currents of the Enlightenment such as belief in individual freedom and equality. Initially it was the revolutionaries who were nationalists, fighting for a new idea of a sovereign people separate from loyalty to kings, church, or other leaders, but soon reactionary forces also used the idea of a national tradition to defend the form of rule they wanted.[16]

The Greek War of Independence

saw Greece struggle to become independent from the Ottoman Empire in the early 19th century. This was significant to many Romantics because of Greece's perceived role as the cradle of western civilization and a vaguely racist desire to free it from alien, Muslim rule.[18] However the desires of some Greek nationalists for a Greater Greece reconstituting the Christian Byzantine Empire never came to pass.[19]

The violent breakup of Yugoslavia.

In the 19th century there were desires for independent nations among the Slavic people ruled by Eastern Europe's various empires: Germany, Russia, Austro-Hungary, and the Ottoman Empire. This gave rise to Polish nationalism

, and many others. The end of World War One saw the collapse of the old empires and the creation of new nation states such as Poland, Czechoslovakia, and Yugoslavia, based on principles of self-determination, largely under the guidance of Woodrow Wilson.[20]

After World War Two and Indian independence, there was a desire for independence among the remaining European colonies in Africa and Asia.[21] The situation was complicated by the often arbitrary divisions of continents into colonies: some nations such as Vietnam had common culture, language, and history going back thousands of years, but others such as Nigeria were artificial concoctions of heterogeneous peoples with very different beliefs and ideals. Either way, result was a lot of bloody wars, including the Vietnam Wars, the French war in Algeria, the Mau Mau Uprising

in Kenya, and many more.

In the late 20th century, it sometimes seemed that almost every region of Europe wanted to secede, often turning to violence. Terrorist group Eta sought independence for the Basque region of France and Spain; Corsican nationalism

led to a series of bombings in the French island; even Scotland, Wales, and Cornwall had small violent groups. Then in the 1990s Czechoslovakia split peacefully into the Czech Republic (later Czechia) and Slovakia, while Yugoslavia descended into bloody civil war. Into the 20th century a desire for terrorism waned, though peaceful separatists proliferated. Today, Scotland and Catalonia have realistic chances of independence, and others are not far behind.