Sweden is (for Europe) both a large and cold country, located in Scandinavia, which becomes livable via slow-onset fast-exit summers that actually regularly achieve Mediterranean temperatures.[note 1]

Sweden is a constitutional monarchy and a parliamentary democracy. As of 2021, the Swedish prime minister is Magdalena Andersson

. This welfare state is usually considered a stronghold of social democracy and the Nordic model. Sweden consistently ranks in the top 10 in the UN Human Development Index,[1] among equally competitive placements in a variety of other rating systems as well. Sweden, being a chummy country, borders other chummy countries as well. Norway (to the west and the north), Finland (to the east), and Denmark (to the south, across the Öresund bridge

Sweden is also a relative fortress of atheism, humanism and secularism.[2] It is not like, say, Mississippi.[3] Or even Iran.

Being a Swede on the internet has to be a pretty wild ride, what with both the left and right using your country as the go-to example of being either a flawless utopia (it's not) or a failed state brimming with rapefugees (it's not). They must be talking about Sweden, New York.

To quote directly from Wikipedia's article on Sweden;

Sweden maintains a Nordic social welfare system that provides universal health care and tertiary education for its citizens. It has the world's eighth-highest per capita income

and ranks highly in numerous metrics of national performance, including quality of life, health, education

So, part of the right believes that Sweden is on the verge of collapse due to their social expenditure and part of the left believes that they prove that the government can spends as much as they want with the welfare state without facing deleterious effects. Which group is right? Neither. Even before de Covid-19 pandemic very few countries had a surplus on their government budget surplus (ie. Spending less than it collects). One of them was Sweden.[9] Even during 2020, the Swedish deficit was only 6% of the country'a GDP, with projections of a surplus as early as 2023.[10] For comparison, the US fiscal deficit on the same year was of almost 20% of the GDP, and the deficit will remain higher than 5% in the foreseeable future.[11] According to the credit rating agency S&P Global Ratings, Sweden also has a maximum AAA credit rating since 2004. Only Switzerland, Norway, Singapore, Denmark, and Canada have had this rating for longer,[12] so investors don’t think (and probably don’t need to worry) about a default, as the right believes.

It has not always been this way though. During the 90’s the Sweden economy was indeed on the edge, with banks collapsing, a sharp drop on the GDP, the devaluation of their currency and unemployment. As a result, the Swedish Social Democratic Party

was forced to liberalize the economy, severely cut spending (including cuts in the social security and pensions), and consolidate a harsh fiscal policy which, despite being painful not only didn’t result in the destruction of the Swedish beloved welfare state as the left feared, but actually made it sustainable.[13][14] 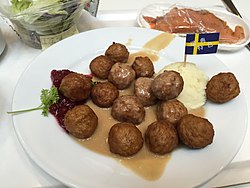 They make made Saabs and Volvos and sell sold them to safety-conscious Americans.[note 2]

IKEA, the furniture chain/restaurant, is based in Sweden. Famous for having a floor layout that amounts to a giant maze and people commonly getting lost in the stores.

The town of Husqvarna

(now spelled Huskvarna) produced the following, among other things (all built by separate companies named after the town):

made some fine movies. So did Ingrid Bergman

In 1967, as an answer to Bergman's highly symbolic and stylized films, director Vilgot Sjöman made a film titled Jag är nyfiken (English title, I am Curious). The 3½ hour film was in the style of French New Wave films from the late 1950s and early 1960s. Sjöman later recut the film into two films -- I am Curious (Yellow) and I am Curious (Blue). In Yellow, the lead actress is shown kissing her boyfriend's penis, which led to censorship in many places around the world, including in Massachusetts. It also led to a dramatic uptick in the number of porno films produced in Sweden. As John Candy would later say in the 1984 movie Splash, some of the world's finest nudie films had come from Sweden.

Snus -- those stamp-sized pouches filled with dried snuff that help nicotine addicts get through long stretches in no-smoking areas -- originated in Sweden in the early 19th century. (Pronounced snoos, not snooze or snuss.)

Sweden claimed to be neutral during World War II, while selling iron ore to the Nazi weapons industry and letting Nazi soldiers travel through Sweden on their way to attack Norway.

See the main article on this topic: Stockholm syndrome

Helsinki Stockholm syndrome is a psychological phenomenon in which the victim of prolonged abuse/crime displays support for or sympathy with the perpetrator(s). The original term was coined in an analysis of behavior exhibited by hostages (kept for five days during a [failed] bank robbery in Stockholm in 1973) and referred to the square where the bank was located; since most of the rest of the world has never heard of Norrmalmstorg, it was formalized and popularized as 'Stockholm' syndrome.

Arguably the most common variant of Stockholm syndrome results from people (generally Americans) visiting Stockholm as tourists, and clearly they must have had a God-awful terrible time there to such a degree that the actual syndrome triggers, because slowly they seem to forget that America is #1, and suddenly they want to stay, and they start to tell people they loved it there, and they later demand to show friends and family tons of their photos from Stockholm where they look suspiciously happy with their vacation... Years later, these poor, deluded people will still dementedly recount their visit to Sweden as having been a "happy and eventful" vacation; a clear indication that some type of brainwashing related to the syndrome must have settled in for good. For shame. 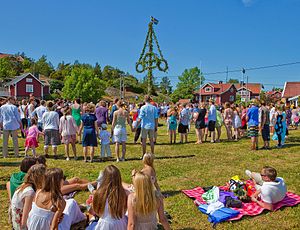 Stockholm is the capital and largest city of Sweden. A 750-year-old city, famous for the handing out of the Nobel Prize, it is well known in science and the arts.

Göteborg, Gothenburg or Goteborg, is the second largest city in Sweden and a notable producer of angst driven pop music, spinny things

, herring and bad puns. It's located on the west coast in Sweden, it's also the front side of Sweden. North Europe's biggest amusement park Liseberg and biggest shopping mall Femman lies in Göteborg.

Malmö is the third biggest city in Sweden. The Öresund bridge runs between Malmö and Danish capital Copenhagen.

Almost everything north of Stockholm, roughly half the country. Save for a few cities along the coast there aren't many people, but there is an abundance of timber, iron ore and hydroelectricity. The far north is also the home of Sweden's indigenous population, the Sami people.

The Vasa, the only fully intact 17th century ship that has ever been salvaged.

ABBA[note 5] was greatly overrated great.[note 6] And so are hot tubs.

It is also quite interesting to note that this part of the region which gave us those great pirates, pillagers, rapists and looters — the Vikings — managed to turn itself into one of the great liberal democracies of the world.[15] This is because Swedish Vikings contented themselves with peaceful exploration and trade in Eastern Europe, plus statebuilding in what's now Russia and Ukraine. They called themselves Rus' rather than Vikings and gave their name to Russia.[16]

It's a woman's life in the modern Sweden[edit]

Sweden is also often ranked as the country that is the most hospitable to women,[17] despite the bleak imagery of Stieg Larsson's immensely popular Millennium Trilogy.

[note 7] Among the advantages for women:

So, about that far-right smear campaign...[edit]

InfoWars, the alt-right (and most recently Trump — see here) have all been active in a 10+ year-long attempt to falsely portray Sweden as being somehow "near collapse" or "on the brink".

The irony being that: actually, Alex and co., Sweden is not exactly doing badly compared to Texas (or to the US, generally). In fact, Sweden is doing pretty OK compared to just about the entire planet[20][21][22], by most metrics no less. You're welcome, Alex.

The fictional Swedish collapse is generally attributed to something like: Sweden being ravaged by a tsunami of Middle-Eastern/African islamist rapefugees, swarming in day and night — by the boatload — on an open invitation from some vaguely defined bleeding heart liberal/"anti-racist"/SJW majority.

(something akin to the BBC of Sweden) has adressed this phenomenon in short:

Any skeptic who keeps running into these oft-repeated lies should be made aware that, unsurprisingly, the InfoWars/Breitbart narrative on Sweden is basically fake news (see Operation Swedistan).

No, Sweden is not the rape capital of Europe[edit]

Wingnuts commonly point out that Sweden's rape statistics are the highest in Europe and the second highest in the world,[23] and assert that Sweden accepting higher numbers of immigrants is clearly the cause of this. However, the real reason Sweden's rape statistics are so high is because the Swedish police are required to classify all reported rapes even if later investigation is unable to provide sufficient evidence for prosecution.[24]

Furthermore, a case involving multiple instances of rape count each incidence rather than the single case, so the total number is "bloated" in comparison to other countries. Then factor in that police actually investigate the claims without going out of their way to humiliate victims any further, and a higher percentage of rapes will be reported in the first place. Also Sweden has a very broad definition of rape and so actions which may not be considered rape in other countries get classified as such, and this legal change happened relatively recently.[25]

Rape is prosecuted regardless of whether the victim presses charges.[26]