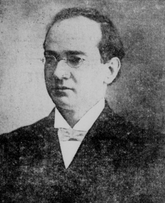 Duncan MacDougall (1866-1920) was a medical doctor in Haverhill, Massachusetts, who in 1907 attempted to prove the existence of the human soul in a scientific manner. His reasoning was that the soul has a certain physical weight, which would leave a person at the moment of death (or up to a minute later, if the person had had a "sluggish temperament"), causing them to become lighter.

MacDougall tested his theory on a grand total of six people and fifteen dogs, laying them on a large precision scale-cum-bed in his office that he had built himself and waiting for them to kick the bucket. In recounting the experiments, he stated that his human subjects lost three-quarters of an ounce at death, or about 21 grams, but the dogs did not lose any weight.

Nobody has been able to reproduce the results of his experiment, which suffered from the classic problems with anecdotal evidence: the sample size was far too small, some confounding factors were not taken into account (body temperature, for example), and the results were wildly inconsistent (with one case having to be excluded due to "interference by people opposed to our work").