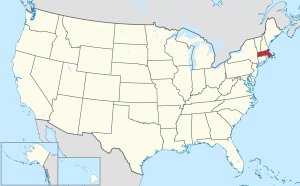 The middle section of New England.

Massachusetts, also known as "Taxachusetts," is a Commonwealth[1] in the northeastern United States. Massachusetts was one of the original thirteen British colonies to escape tyranny and cheap tea via the American Revolution. It was also the first state in the Union to make slavery illegal.[note 1]

Massachusetts is home to the myth of the Pilgrims, who in 1620 formed the first permanent English-speaking colony in the New World, unless you learned about Jamestown, which was founded in 1607. That colony was known as Provincetown,[note 2] but when they learned that it was naught but a vile spit-of-land peninsula with no fresh water and rampant disease, they hopped back on their boat and sailed across Massachusetts Bay to the mainland to find a better place to park themselves. Plymouth, the new home of the Pilgrims, got a fancy rock, its own holiday special every November, and later, a nuclear reactor. Jamestown got malaria.

It is one of the few states that has as its capital a city that people can remember (Boston), and was the first to legalize full marriage rights for homosexual couples. It used to really really hate whales, but these days is pretty pro-environment.[2]

Parts of Massachusetts that are not Boston[edit]