From RationalWiki
(Redirected from Eid)
Jump to: navigation, search 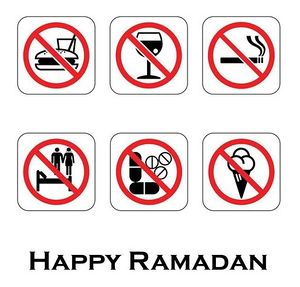 Ramadan is the ninth month of the Islamic lunar calendar.[1] Fasting during Ramadan (or sawm) is one of the five Pillars of Islam. [2] During Ramadan, devout Muslims are forbidden to eat, drink, smoke, fuck, or have impure thoughts from the earliest daylight (not sunrise) to sunset for a period of one lunar month.[3] Some adherents go so far as not swallowing their own saliva (though this is permitted),[4] though others dine on special comestibles all night long. Apparently, God can't see them at night.

After Ramadan comes Eid al-Fitr (Festival of Breaking Fast) when Muslims have a blow-out feast, wear their best clothes, and fire guns into the air (mileage may vary from country to country). During Eid there is a palpable relief that Ramadan is over, among both believers and non-believers.[5]

Owing to a difference of 11-12 days between the lunar and solar years, the month of Ramadan advances through the seasons.[6] In the Arabian peninsula, it passes through both the relatively mild days of January and the blistering heat of August.

Usually "fasting" means fasting from food and water. However, there are several types of fasting laid out in the Quran:

It is specifically stated that fasting is not required for those who would suffer a special hardship from the fast, such as pregnant women, travelers, and the ill - although they are expected to make up for it a later date. The sick and elderly are also excused.[7] Pakistani cleric Tahir Ashrafi said:[8]

Islam has drawn conditions for fasting, it is even mentioned in the holy Koran that patients and travellers who are not able to bear fasting can delay it and people who are weak or old and are at risk of falling sick or even dying because of fasting should abstain.

Fasting at the Earth's poles[edit]

Under such circumstances, Muslims usually follow the timetable of either the nearest major city with a normal day-night cycle, or that of Mecca.[9] However, when the sun is up for most but not all of the day, it is tradion to use local times, as people cite doing so in the cool weather for longer is still easier then doing so for a shorter time in the blazing heat.[10] Allah, in all his wisdom, failed to mention this solution in the Qur'an or any Hadith.[11]

During this period in the hours of daylight, non-Muslims in Islamic countries are expected to hide themselves away in curtained rooms whenever they want to drink a cup of coffee, eat a doughnut, have a smoke, or fancy a quick shag.[citation needed] Sex on the beach is a definite no-no. In countries where alcohol is licensed for debauched foreigners then they had better have stockpiled enough to see them through until the Eid.

Why? Because the Muslims don't want to have to think about your damn impure heathen ways – at least until the end of the lunar month, at which point it's all jolly again.

Depending on who you ask, fasting rejuvenates the body or leaves it dehydrated and lethargic. Science can answer which is more prevalent.

Many Muslims claim that Ramadan fasting is healthy, and in theory this could be the case. For example, it may help people lose weight and appreciate the importance of hydration.[12]

While there are possible health benefits to fasting (see Fasting#Health), fasting will only be effective if done safely (eating and drinking enough) and if people don't overeat/overdrink before and after the fast begins.[13] Moreover, even normal Ramadan fasting can have serious ramifications. Not eating food or drinking water all day generally tends make people less productive, more distracted, and potentially too exhausted to work the next day. So your body is in tip-top shape – you won't be doing anything with it.

And good luck burning off that Eid belly.

It's sometimes believed that Ramadan fasting is equivalent to starvation. However, as the NHS notes, "you are unlikely to reach the starvation stage during Ramadan, because the fast is broken daily."[14] Of course, this requires that the fasting be done well.

And yes, Ramadan can kill. For example, a heatwave

in Pakistan coincided with Ramadan (and a power outage) and killed over 1000, many of whom failed to eat or drink and so were at higher risk.[8][17] Similarly, if Ramadan occurs during the heat of summer, it is advisable to refrain from venturing onto the Middle East's highways – as the incidence of traffic accidents caused by dehydrated drivers reaches a cyclic peak.[18]