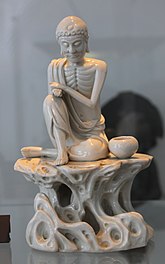 Fasting is going without food entirely, abstaining from certain types of food (often meat), or reducing food intake drastically (such as a juice-only diet), for a specified period of time. It has been popular in certain communities for thousands of years, often for religious reasons, but more recently intermittent fasting such as the 5:2 diet has grown in popularity.[1]

Fasting is calorie-cutting in its simplest form. Practiced as a crash fad diet, fasting is ineffective in the long term, as weight lost during the fast will be gained back upon resuming an unhealthy diet.[2] Intermittent fasting, such as eating only one or two meals a day, or eating less on certain days, can be effective if continued indefinitely, and may be easier to adhere to than continuous caloric restriction. Research suggests some benefits for intermittent fasting but there are questions over its safety and possible long term effects.[3] As with any diet, it is most effective when combined with exercise.

Fasting (called more appropriately, a "hunger strike") has also become one of the few ways for prisoners without other resources (like lawyers, human rights workers, guards, etc.) to protest the conditions they are being held under. Historically used by Gandhi, IRA members Terence MacSwiney and Bobby Sands, British suffragettes, the prisoners at Guantanamo Bay, and most recently, Wal-Mart employees protesting low wages.[4]

Virtually every religion has some aspect of fasting, though the specific rituals and purposes vary depending on the religion.

See the main article on this topic: Ramadan

Muslims typically fast during the month of Ramadan, typically to learn self-restraint (Taqwaa). While fasting from early daylight (right before dawn) until sunset, Muslims refrain from consuming food, drinking liquids, smoking, and engaging in sexual relations.[5] For more, see the main article.

Christians fast for a variety of reasons including spiritual purity, spiritual focus, gratitude and reminder of the sacrifice of Jesus. Anorexia mirabilis

(meaning "miraculous lack of appetite") is/was the practice of starving oneself almost unto death, common in the Middle Ages. It is sometimes practiced as part of spiritual warfare, or as part of an exorcism. Many Christians, mostly Roman Catholic, fast during Lent, 40 days before Easter[6] (It is actually 46 days but many traditions exclude Sundays from the requirement to fast.)[7] During these periods Christians are supposed to eat only one meal per day,[8] and are required to abstain from eating meat (fish and eggs are fine) on Friday's, as well as Ash Wednesday,[9], and performing sinful acts. Many Christians precede Lent with a period of festivities often called Carnival, whose name comes from the Italian Carnevale, literally meaning "farewell to meat."

It has been erroneously believed that in 600 CE, Pope Gregory I declared that fetal rabbits were aquatic and therefore "fish", which could be eaten during Lent; his declaration marked the beginning of rabbit domestication.[10] By around 920 CE, Christians began giving up red meat on fasting days for fish and fowl. This marked the beginning of breeding chickens to lay eggs all year round.[10] An analysis of historical records (the declaration was never written), divergence of bone structure, and genetics indicates that there was no single point of domestication of rabbits in the past 20,000 years.[11]

Eastern Orthodoxy has very similar rules about fasting as the Catholics, but also requires abstinence from eggs, fish, dairy, and oils.[12] They also fast for much more of the year, including the Nativity Fast (the 40 days before Christmas),[13] the Apostle's Fast (at most 29 days, ending on June 29th), the Dormition Fast (August 1-14), as well as every Wednesday and Friday (Eastern Orthodox Christians must have very boring Friday nights),and the week after Pentecost.[14] These all exclude feast days that may happen to coincide, where the rules of the fast are often lessened.

Hindu and Buddhist monks both have codified rituals for near starvation as they explore death, the meaning of life, and respect for what they have beyond the material. Both faiths also have extreme versions in which practitioners nearing the end of life deliberately starve themselves to death as a combined sign of their devotion and form of euthanasia (Prayopavesa

[16]) with a similar tradition found in Jainism (Sallekhana

The most famous Jewish fast day is Yom Kippur, the day of Atonement.[18] It is biblically mandated and is the one fast that most Jews are both aware of and actually participate in, taking place from sundown the night before to one hour after sundown the night of.[19] There is also the fasting on Tisha B'Av, which commemorates the destruction of the Jewish temple and additional tragedies which befell the Jewish people, though it is less universally practiced.[20] There are also several minor fast days dotted throughout the liturgical calendar and many couples, prior to their wedding, will also fast.[21]

Members of the Bahá'í Faith fast during the (Badí calendar) month of 'Ala or "loftiness" (i.e., the 19 days leading up to the vernal equinox, which is called Naw-Rúz or in Persian Nowruz). Similar to the Muslim fast during Ramadan, this consists of total abstention from food, drink, and smoking from sunrise to sunset. However, adherents who are in ailing health, who are younger than 15 or older than 70, who are pregnant, menstruating or breastfeeding, or whose work requires physical exertion, are exempt from the fast. Nonetheless, all are still enjoined to adopt a reverential attitude and not to overindulge. Fasting and obligatory prayer are held to be the two pillars of man's spiritual life; additionally, participating in the fast is held to increase one's compassion and awareness for the plight of the poor and enhance the appreciation of the individual for the relative abundance with which he is blessed.[22]

Fasting is also found in a host of Native or spiritualistic religions, including such popularized activities as the "vision quest", in which one goes without food for three to four days in a wilderness setting while they reflect on the meaning of life, search for guidance, or honor their tribe and world.[23]

While fasting may have some health benefits, it is easily pushed into the area of woo. Fasting is claimed by its proponents to cure all manner of diseases and ailments, up to and including cancer,[24] and give the body a chance to cleanse itself of toxins.[25]

The changes that happen in the body during a fast depend on the length of the continuous fast. The body enters into a fasting state eight hours or so after the last meal, when the gut finishes absorbing nutrients from the food.

In the normal state, body glucose, which is stored in the liver and muscles, is the body’s main source of energy. During a fast, this store of glucose is used up first to provide energy. Later in the fast, once the glucose runs out, fat becomes the next source of energy for the body. With a prolonged fast of many days or weeks, the body starts using protein for energy.

This is the technical description of what is commonly known as "starvation". It is clearly unhealthy and involves protein being released by the breakdown of muscle, which is why people who starve look very thin and become extremely weak.

Fasting for a short period is recommended prior to receiving certain blood tests, or before performing a colonoscopy endoscopy, or prior to surgery involving general anesthesia (to reduce the risk of choking on one's breakfast).

See the main article on this topic: Inedia

Inedia (Latin for fasting) is the ability to live without food, sustaining one's body only on air, sunlight, or "insert mysterious energy force here".[30] It's bullshit.

The 5:2 diet is a weight-loss diet that is based on the principle of eating what you like for 5 days and fasting for 2 days. Typically, practitioners will eat a normal diet for 5 days, 2000 kCalories for women or 2500 for men, and on the fasting days have a quarter of that - 500 kCal for women or 600 for men.[31]

It developed from ideas of intermittent fasting as a method of weight loss. A 2012 episode of the BBC's science program Horizon, entitled 'Eat Fast and Live Longer', included ideas about the benefits of fasting from Michael Mosley; in January 2013 he published The Fast Diet, followed soon after by former journalist Kate Harrison's The 5:2 Diet Book.[31] There is some evidence of health benefits from fasting, albeit mainly in animals, but also disadvantages, which are discussed below.

Some people say it is easier to follow than conventional diets because you're not excluded any foods.[31]

There is evidence in mice that a binge-fast cycle can cause weight loss; research was conducted by Valter Longo.[32]

A 2007 paper found that fasting may reduce food cravings which other forms of diet tend to increase.[33]

There are other claimed health benefits of fasting, including promoting regeneration of brain tissue, albeit mostly from animal studies, and you need more extreme fasting than the 5:2 diet for the full effect.[32]

It may be easy for 5 days a week, but on the fasting days people must contend with hunger, including headaches and dizziness - which can be exacerbated by dehydration if you're not consuming as many fluids as normal.[31]

It may result in a lack of nutrition unless you are careful.[31] To be healthy, people need to watch what they eat every day, not eat junk food then starve themselves.

There are also concerns that it may promote unhealthy eating practices, particularly for teenagers.[31] A link to eating disorders like anorexia or bulimia has been mentioned but it's not clear there is any evidence.[32]

Exercise such as running on a fasting day is not advisable.[32]

It's also important to note that if performed for weight loss, you may still need to watch your calorie intake even with the diet. Assuming a woman's calorie needs are 2000 x 7 = 14000 calories a week, having 2000 calories on 5 days and 500 on 2 days provides 11000 calories per week, a sizeable reduction. However, if she is eating more than the recommended amount, say 2500 calories a day, then even with fasting days weekly consumption will be 13500, a very modest saving, and eating more than 2600 calories she will still exceed the recommended 14000. But as mentioned above, results with mice indicate that weight gain may be different with a fast-binge cycle than with regular eating.